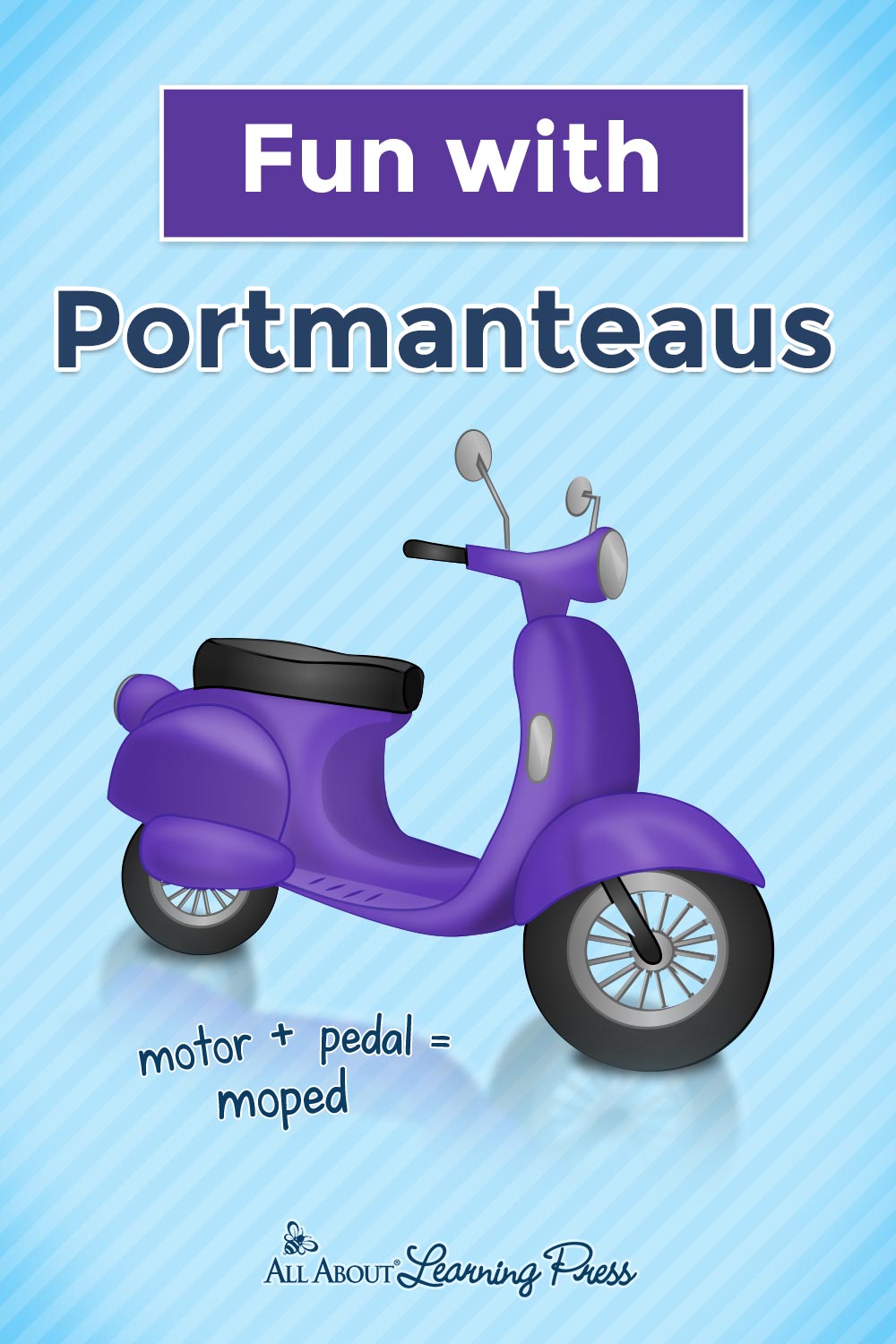 I love playing with words.

The English language is full of quirks and oddities—things like puns, palindromes, tongue twisters, spoonerisms, and more. But have you heard of portmanteaus? 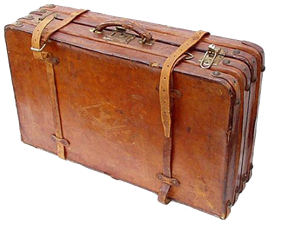 What in the World Is a Portmanteau?

The word portmanteau (pôrt-mănʹ-tō) refers to a large leather suitcase that opens into two hinged compartments. The word is a blend of two French words: porter, which means to carry, and manteau, which means cloak or mantle.

When we’re talking about language, portmanteau takes on a different meaning. In linguistics, a portmanteau is a word that is created when the sounds and meanings of two different words are blended into one.

Still curious about the origin of portmanteaus? The video below offers a light-hearted look at how a few well-known portmanteaus might have gotten their start. ?

Well, as entertaining as that was, the concept of portmanteau words is actually attributed to storyteller Lewis Carroll. In Through the Looking Glass, Alice asks Humpty Dumpty to help her make sense of the Jabberwocky poem. Humpty Dumpty explains:

“Well, ‘slithy’ means ‘lithe’ and ‘slimy’; ‘lithe’ is the same as ‘active.’ You see it’s like a portmanteau–there are two meanings packed up into one word.”

Humpty Dumpty was exactly right! Portmanteau words (sometimes just called portmanteaus) include brunch (breakfast and lunch), smog (smoke and fog), motel (motor and hotel), and splatter (splash and spatter), to name a few. There are many portmanteaus in the English language, with more being created every day!

Here are a few more examples: 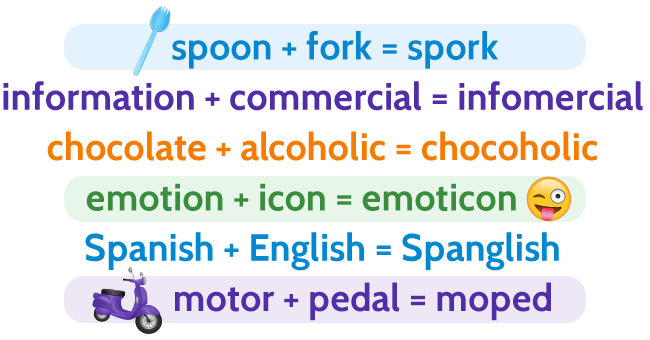 As you can see, portmanteaus are essentially just “made-up” words that have worked their way into our everyday language. The concept of made-up words is pretty funny to children. When I talked about portmanteaus with my children when they were young, my daughter came up with sweems (sweet dreams) right on the spot.

Would you like to have a little fun playing with portmanteaus and build your child’s vocabulary all at the same time? Download our “Bingo Smash-Up!” game to play with your children! 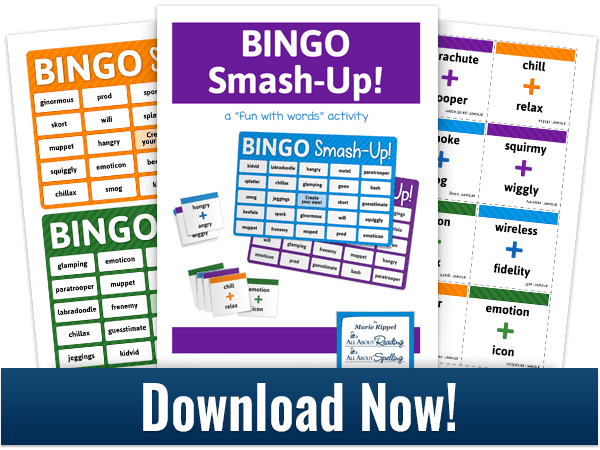 How about you? Can you think of a portmanteau word? Please share in the comments below!

thank you so very much I am Accustomed with the Term Blending and this is my first time to hear the word Portmanteau and I was surprise and the activities are so fun I love it and my learners would surely love it to thank you.

You’re very welcome, Edmon! Portmanteaus are just one of the many ways English can be fun to play with. ?

Such a great list of portmanteaus, Masashi. I’ve not heard of a few of them, such as mornight. I’m going to start using that one, because I’m up while it is still mornight every day!

This made me smile, Manish! I’m from the border between the United States and Mexico and we often speak “Spanglish” around there (Spanish + English).

This is fantastic!!!Thank you for sharing!

This is brilliant! I know my 10yo will love this ?

Kay,
I hope your 10-year-old has a great time with this portmanteau video and game!

I never realized these kind of words actually had a name! I accidentally make them up all the time just because my mouth can’t always keep up with my brain :) The most memorable one was when I was talking about how we have both a spirit and a body and my mouth said “Spody” before I realized it!

Mel,
I completely understand. Sometimes our minds work faster than our tongues can keep up! “Spody” is a particularly good one. :D

Had never heard this term for these combo-words. Kids are great at coming up with these!

Michelle,
Yes! Kids come up with the best ones.

When our daughter was little she would call “windshield wipers” – “windshipers” :)

When my daughter was little, she made up Zeeper for zookeeper.

Kirsten,
I like “zeeper”! That would be an awesome official job title. :D

Love Love Love all the activities that AAR/AAS has offered for free; my children are reading and spelling aloud!

This actually looks like a game my kids might enjoy. We already do some portmanteaus that we haven’t heard anywhere else, like ‘linner’ — lunch and dinner, lol.

This game is a lot of fun and helps kids to start recognizing portmanteaus and even wanting to make up their own!

Wow – what a fun language game!

This looks like a FUN way to introduce some new words. And they won’t even realize they are learning something new!

Aimee,
Even if they do realize they are learning something new, it’ll still be fun!

Thank you for another fun twist in teaching vocabulary

What level would this be appropriate to introduce? Thanks.

Lacey,
Done orally, children could have fun with portmanteaus even before they can read. It is easy to hear that brunch is a mix of breakfast and lunch. However, if you wanted your child to read the bingo words, it would probably be best with All About Reading level 2 or above. Students might still need some help with some of the words, but after learning some syllable division rules in AAR 2 many of the words would be straightforward.

Brilliant! The things I’m learning when teaching my son. I look forward to playing this one.

Thank you for this wonderful Bingo game. Its going to be so much fun. Cant wait to play with my son.

You are welcome, Marie. I hope your son has a lot of fun with it!

Just printed off the BINGO game and sent it through my laminator. Need to get it cut and add it to tomorrow’s fun things to do. Thank you for a fun way to explore words!

Vanessa,
Let us know how it goes!

I am excited to try this bingo game. I think it will be a lot of fun for my children and will be a great way to explore words for his speech therapy and remedial reading!

Robyn,
Yes, games like these would be a nice way to add a child’s therapy. Have fun!

Oh! What a great way to spend an afternoon!

Loved the video. Fun way to learn about this interesting and different piece of the English language.

Parents can learn a lot from teaching these lessons too! Very interesting.

I didn’t know about this! Interesting!

Thank you! My niece is really beginning to find the fun in words; she’ll love this! Some of us are using the word “hanitizer” because it’s smoother and faster than “hand sanitizer!” It came from the 2-year old vocabulary of another niece.

Antiqué,
I hope your niece has a lot of fun with our Bingo Smash Up game! Hanitizer seems to be much more common than I thought, however. Many people her have mentioned it.

Neat! Never knew they were called this!

I would choose level 1