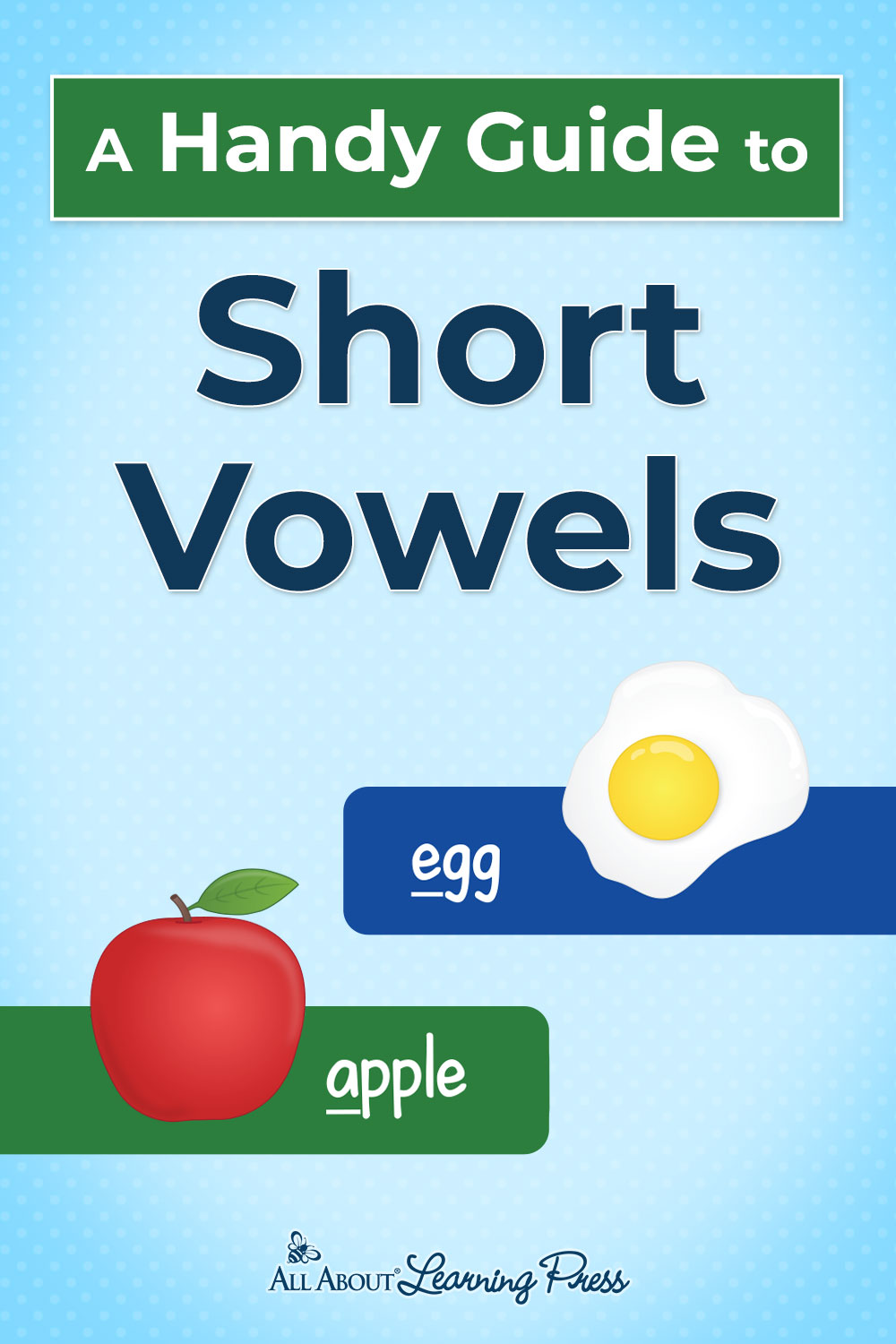 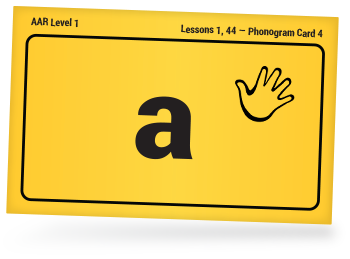 It’s a great place to start. Once they learn the short sounds of the vowels and the consonant sounds, kids can decode hundreds of words! But just learning the simple spelling of the five short vowel sounds isn’t quite enough! You can help your child learn to read and spell even more words by teaching him four common ways to spell short vowel sounds.

Short Vowels Can Be Spelled in Four Ways

The chart below illustrates the most common ways to spell the short vowel sounds. 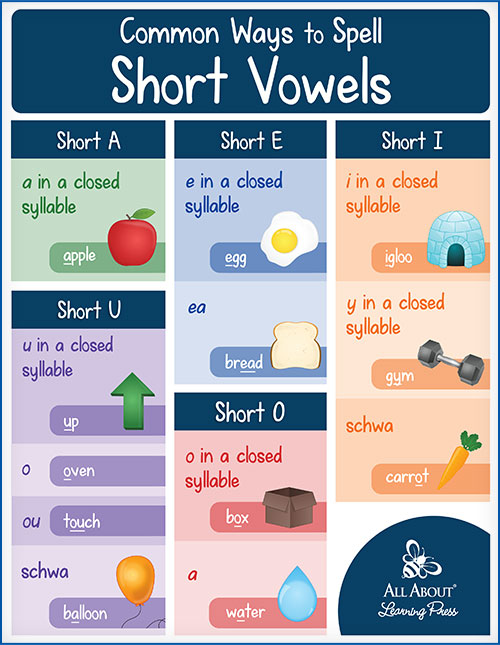 Although seeing the different spellings for short vowels on the chart above can be helpful for people who already know how to read and spell short vowel sounds, I recommend using the chart only for reference rather than as a learning tool. Teaching all these spellings at once would be overwhelming for a beginning student. Instead, teach them to students incrementally, one at a time.

Of course, as we all know, English has exceptions! In addition to the common spellings for the short vowel sounds, there are uncommon ways to spell them as well. Fortunately, these alternate spellings are few and far between.

Are you interested in seeing how we teach the short vowel sounds in All About Reading and All About Spelling? Here is a sampling for you to download and enjoy!

This lesson shows how we teach words with the short E sound represented by the letter E.

This lesson shows how we teach words with the short E sound represented by phonogram EA.

When it comes to teaching short vowel sounds, here’s what you need to keep in mind:

All About Reading and All About Spelling walk you and your student through all the steps needed to help your student learn to read and spell. The programs are multisensory, motivating, and include everything you need. And if you ever need a hand, we’re here to help!

Looking for information on long vowels? Check out our Handy Guide to Long Vowel Sounds!

Wow, what a gift! Great visuals. My students love animals! You are very talented. Thank you so much for sharing!
Dawn Grim

Grateful for this program and how easy it is to help my kids learn how to read.

Grateful for this program and how easy you guys make it to teach my kids how to read!

I love the hand sign on the vowel cards to remind us to use a hand sign to pronounce the short vowel (like and meaning to pretend to bite an apple for the /a/ sound. We haven’t come across the other sounds yet as we’re in AAR level 1, but I know my daughters getting a solid foundation!

Brittany,
We only use hand motions for the short (first) sound of A, E, I, O, and U as the short vowel sounds can be tricky for some children to distinguish yet they are the most common sound of each vowel. I’m glad to hear they are working out for you!

This is a perfect way to help kids. My child is really struggling and I think this will help her alot. Thank you so much for this awesome program.

I hope this is helpful for your child, Niki!

Can’t wait to try these with my 5 yr old.

We have been using AAR Level 1, and I am anxious to start using AAS Level 1 with both my 6-yr-old and 12-yr-old.

My son is grappling with the concept of short vowel sounds now working his way through Spelling Level 1. This chart will come in handy!

Glad this will be helpful, Jillian!

Excited to use the free chart! I think it will be very helpful.

I love how you make concepts so easy to understand!

My kid is 4 years old and I’m having trouble teaching her how to read.. This is a very handy guide! :D

I’m glad this is helpful for you, Germaine. However, many 4-year-old children are not quite ready to be successful with reading yet. You may want to ensure she has mastered Reading Readiness Skills that are necessary for success in reading.

This is so helpful. We are excited to start All About Spelling Level 1 as soon as it arrives here. Thank you!

You’re welcome, Silke! I’m glad this will be helpful for you.

Thanks for the chart! It will help both my beginning reader and my child with language processing disorder.

You’re welcome, Nicole! I’m glad this will be helpful for your students.

Grateful for your helpful and attractive charts!

I’m happy this is helpful for you, Catherine!

The hand motions on the short vowels really helped my daughter. We are in AAR3 and we still use them all the time. All I normally have to do is start the motion and she knows what it is.

I’m glad to hear that hand motions have been such a help for your daughter, Jonie! For most students, they are a scaffolding help used for a short while until the short vowel sounds are mastered, but occasionally they provide long-term help like for your child.

This would be great for my newest homeschooled kindergartener!

I’m glad this will be helpful for your student, Gabrielle!

Thank you so much for helping to understand this concept better!

The schwa section was really helpful! That is something I struggled to explain correctly

Schwas are tricky, Elizabeth. We have an entire blog post on How to Teach Schwas.

I needed this guide for a quick review! Thanks!

You’re welcome, Erin! I’m glad this will fill a need for you.

I’ve used this program for three of my children so far. There’s nothing like the seeing them succeed where they have tried for so long, and after a fantastic start with my oldest, we’re using the program for the rest of our children.

Thank you, Hannah! It’s wonderful that the program has been such a great fit for your family.

Everything is so helpful with my kids reading.