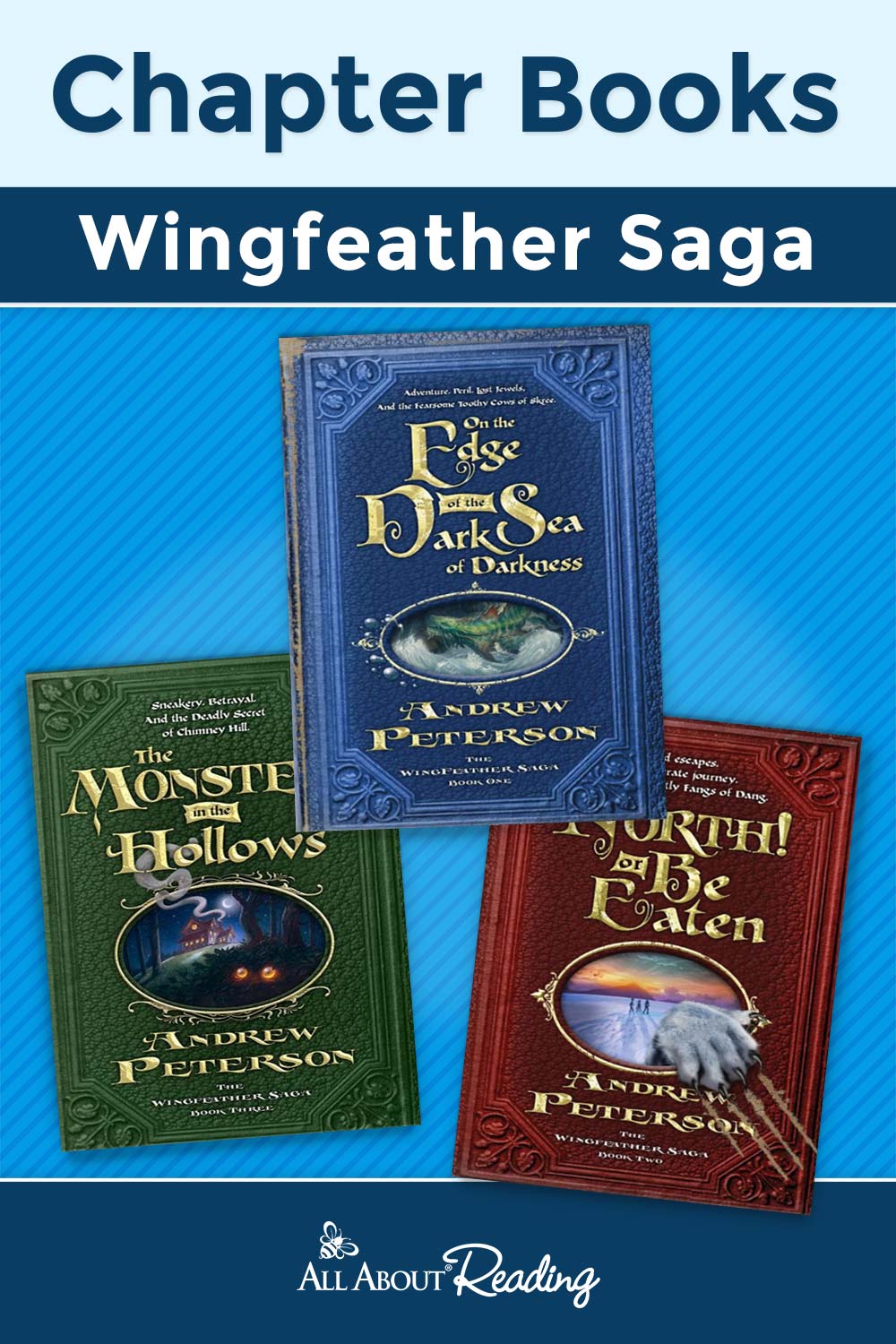 If you are looking for books that older children will enjoy, the Wingfeather Saga is for you! Fourteen-year-old Jimmy is such a huge fan of the Wingfeather Saga that we asked him to help us write this review. Jimmy doesn’t normally love to read, but this series captured his attention and turned him into a voracious reader. He couldn’t put these books down!

Take our free Wingfeather Series Checklist to your local library! 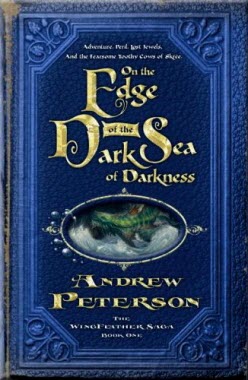 The Wingfeather Saga is a four-book series that describes the thrilling journey of Janner, Tink, and Leeli Igiby, who live in Glipwood in the land of Skree. Janner had always thought of life in Glipwood as dull, but then his brother Tink stumbles upon a map leading to the Jewels of Anniera and a secret only hinted at in stories.

That’s where the saga begins. And there is nothing dull about it.

This four-volume series is a thrilling page-turner with intense battles and plot twists that will keep you reading all night long. In fact, you may want to be sure you have the next book handy as you near the end of each one! Trust me…you won’t want to wait for the next one to arrive!

The fantasy world conceived by Andrew Peterson boasts a creative cast of characters unlike any you’ve seen before. Battles between evil villains and honorable heroes, epic adventure, edge-of-your-seat suspense, lighthearted humor, and even some subtle romance will pull you into every single page.

In the first book of the series, On the Edge of the Dark Sea of Darkness, readers are introduced to the Igiby family—Janner, Tink, Leeli, their widowed mother, and their grandfather. On the day of the Sea Dragon festival, the people of Glipwood gather at the edge of the Dark Sea of Darkness to watch the sea dragons swim by. When Leeli and her dog Nugget are attacked by a Fang, Janner and Tink join the fight. The children’s encounter at the festival sets in motion an epic conflict that pits the Igiby family against Gnag the Nameless and his army of Fangs. But the battle has only just begun. 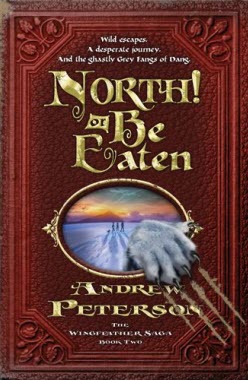 North! Or Be Eaten, the second book in the series, finds the Igiby family on the run from the Fangs. To evade their hungry pursuers, they set out for the Ice Prairies in the North. But along the way, the family encounters deadly hunters, a seemingly endless series of scary situations, and even more Fangs. When they reach the Ice Prairies, a battle breaks out and the family is forced to set sail for the safety of Green Hollows. But will they really be safe?

In The Warden and the Wolf King, the exciting conclusion of the Wingfeather Saga, war has broken out as the fight for the Jewels of Anniera intensifies. But no matter how much the people of Green Hollows fight back, the Fangs just seem to keep coming and coming. In the end, Gnag the Nameless will be defeated, but at what cost? For just as in real life, victory often requires sacrifice.

The son of a preacher, Andrew Peterson grew up in Illinois and Florida. Though Peterson originally gained attention as an award-winning singer and songwriter, eventually he branched out and tried his hand at writing. A born storyteller who loves to create, Anderson loves to let his imagination run wild. And he loves encouraging imagination in his readers as well. In Peterson’s Note to Parents, he explains, “If a reader is willing to trust me with a little of his or her imagination, I want to light it up with truth, and beauty, and goodness.”

Andrew Peterson and his wife Jamie live in Nashville, TN with their three book-loving children.

The Wingfeather Saga at a Glance

Please note: Though this series is best suited for more advanced readers, the Wingfeather books make great read-alouds for children of all ages. However, parents should exercise caution, as some parts of the series may be too intense for younger children.

Do your kids need a little extra encouragement to read?

Take our Wingfeather Saga library checklist to your local library and have your child check off books as he reads them!

This series is definitely at the top of my daughter’s favorites (age 12) and she has gotten all her friends to read and live them as well.

Sharing favorite books with friends is the best, Larae!

My kids absolutely love the Wingfeather Saga! Although I do get tired of hearing about toothy cows. I really hope more books eventually come to this series.

Thank you for letting us know that your kids have enjoyed this series, Becki! I know that double feeling of pleasure and dread when a kid is so very interested in a book. You’re pleased about their enthusiasm about reading but you dread hearing about it for the 118th time in one day. ?

Yes, these are amazing!!!! They are my new favorite book series. Right up there with Narnia and Lord of the Rings. :)

Thank you for this! Your blog is so helpful and full of amazing and resourceful suggestions and ideas. I had not heard of this series before. One of my kids is a huge fantasy reader (Harry Potter, A Series of Unfortunate Events, The Chronicles of Naria, etc) so we will go look for it!

You’re welcome, Sonja! I hope your child enjoys this series as much as you have all those others.

These sound like fun books. I have never heard of them, but I will definitely check them out!

Seems like an interesting series for my 9 year old. She’s really falling in love with books.

My daughter and I might have given up on the first book had we not been advised to get past the first few chapters. Our friend was right- we absolutely loved the story. If you have a child that doesn’t initially like the book, read the first few chapters out loud- unless they just don’t like “can’t wait to see what happens next“ adventure stories, they will want to keep reading. Just beware- you’ll get hooked too!

Thank you for the heads up, Laurie! Sometimes books do start a bit slow, but it’s great to know that it is worth it to keep reading.

I checked the first book out from the library, and it looks great so far! Thanks for the recommendation, as well as the notes about the author!

Tauni,
I’m happy to hear you are liking the first book so far!

This looks like a great series! My oldest son is so particular about the books he reads, but I think this series just might fit the bill. Thanks for the review!

I bet my girls would love these! I’m going to have to see if our library has them ?

Heather,
I hope your library does have them!

I’m going to have to bump the first book up on my reading list.

Let us know how you like the book, Marisa! I hope you love it.

These books are so much fun! My boys 6 and 8 loved them!

Thank you for book recommendations!

We are always looking for more chapter books, especially a good long series.

It’s wonderful to have books that are high interest and appealing to almost all readers. Thanks for highlighting this and all the series!

Thank you for this recommendation. I’m always on the lookout for good, quality books for my kids. This is very helpful.

I cannot thank you enough for TEAM AAR/AAS! YOU are always so encouraging and being the extra eyes and ears for book reviews, games, inspiration…..I appreciate that I can check in and find something new, but most importantly TRUST sound, conservative values in everything! Thanks for being my mentors!

You’re so welcome, Victoria! I love that we can help you in this way. I’m going to pass this message on to the entire AALP team, as I know they will love reading it too.

I’m going to see if my library has these. I live reading and I desperately want my son to find joy in it as well. I love kids books too, a person is never too old for any book.

Thank you for your thorough review will have to check these out for my daughter!

This series sounds awesome! Love the covers too.

How wonderful to receive such a review. I’m always looking for new series to introduce to my avid readers. I’m definately looking into this one.

Genice,
I hope your avid readers enjoy this series!

We are looking for a series for our 13 year old daughter who is not too interested in books right. Would you recommend this series for her?

Kari,
That’s a good question, but not easy to answer. Many 13-year-old girls would love this series, but not everyone is into fantasy/adventure type series. What are her interests? Maybe she would prefer a mystery series or one that is historical in nature. Or maybe science fiction is more her speed. It’s hard to say.

If she likes movies with dragons and quests, then yes, I recommend this series. Even if she hasn’t watched many such movies, this series is still worth a try. See if she likes the first book.

I’m sorry I’m not much more help, but finding books people love is so personal. However, we have a number of other Chapter Book Reviews to give you more options.

Samantha,
I glad we would recommend some new books for you to be excited about! I hope you enjoy them.

We love all about reading. Its so much fun. we are excited to add this amazing series to our collection.

My 10 year old son loves this series! We did not know about the series extras, Thanks!

Jennifer,
I’m glad you found out about the extras since your son loves the series. My kids love extras like the Pembrick’s Creaturepedia.

We adore the Wingfeather Saga. My husband and I have each read the series multiple times and are working through it as a read aloud with our kids. Andrew Peterson is an engaging storyteller, through song and written word.

Erin,
Thanks for sharing that both you and your husband have read this series more than once! To me, the true test of a great book is being willing to reread it.

I’m looking for something like this- thanks for the review !

Thanks for recommending the book series.