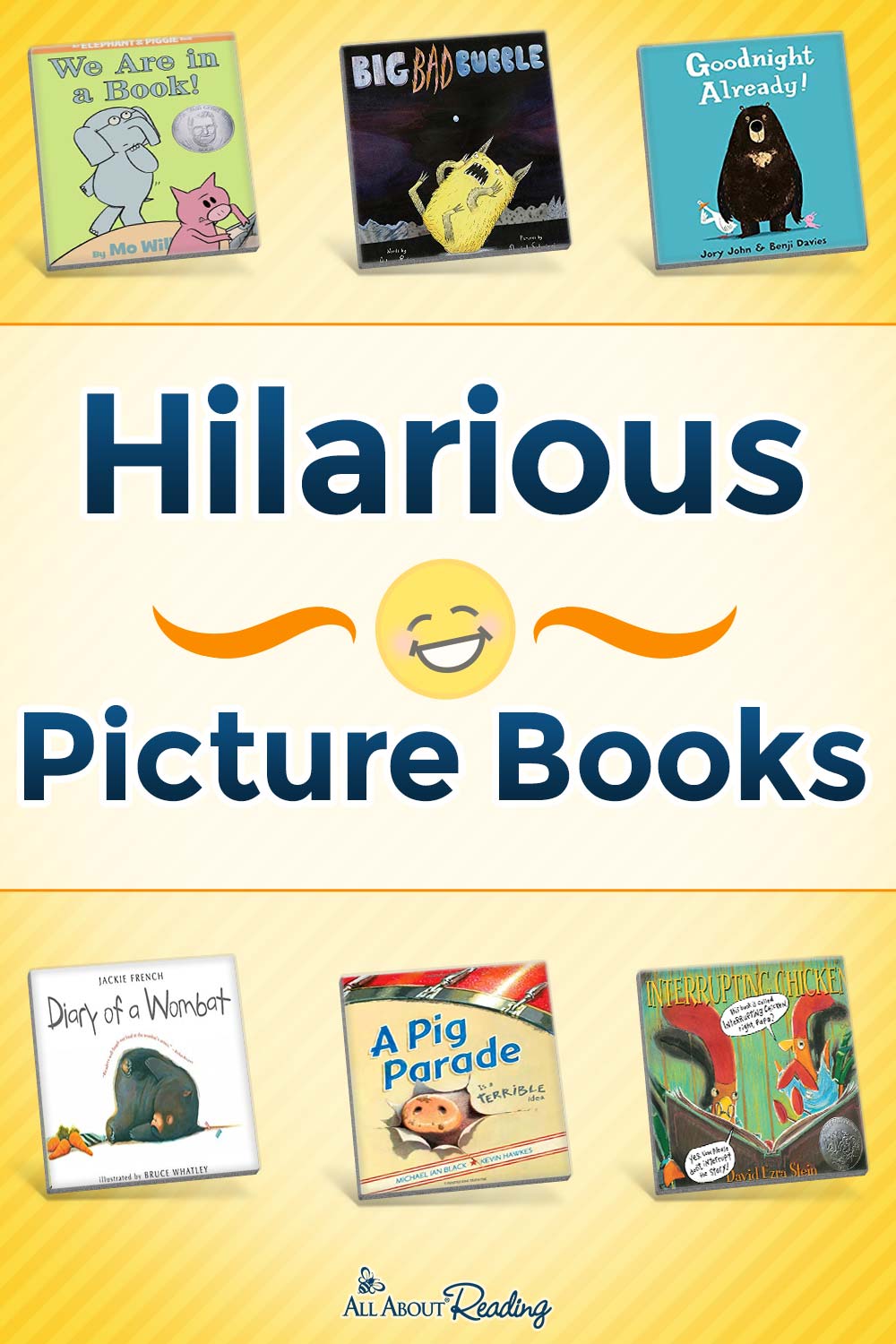 If laughter is the best medicine, these hilarious picture books are just what the doctor ordered. Masterfully written to both surprise and delight readers and listeners of all ages, the books listed below have one main purpose—to make you laugh.

Read the synopses of the books listed below and download my free library list to take with you on your next visit to the library. Then grab the kids and a comfy chair and get ready to laugh! 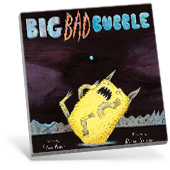 In Lala Land, all the big, scary monsters are terrified of bubbles. It might be because of Mogo and the chewing gum bubble that attacked his face. But maybe the narrator of this silly book can convince these timid monsters that bubbles aren’t as scary as they seem. 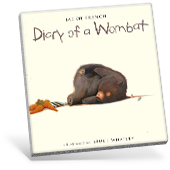 Diary of a Wombat
by Jackie French

Diary of a Wombat records a week in the life of a mischievous wombat. Wombats aren’t exactly known for their industriousness, and they really like to sleep. And this wombat has a knack for training humans to meet his every need. Hmmm…sounds a bit like some children I know. 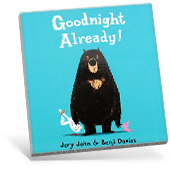 Bear is so tired he could sleep for months! But when he tries to get some much-needed shut-eye, his energetic next-door neighbor isn’t ready to sleep. Can Bear convince Duck that it’s time to say “Goodnight Already!”? 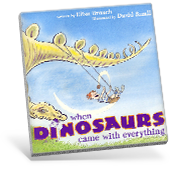 When Dinosaurs Came with Everything
by Elise Broach

Today at the bakery they’re giving away a dinosaur with a dozen doughnuts. At the doctor’s office, the nurse is giving away dinosaurs instead of stickers. If you’re a kid, it’s a dream come true—but when dinosaurs come with everything, Mom might be slightly less enthused. What would you do with a dinosaur? 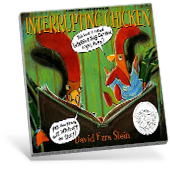 Are your story times prone to interruptions from over-excited listeners? If so, you’ll certainly relate to the patient papa in Interrupting Chicken. And maybe, just maybe, you can get through this adorable picture book without any interruptions. Then again, maybe not. 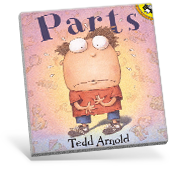 When a boy begins to see signs that his body is falling apart—a piece of belly button fuzz here and a wiggly tooth there—it’s hard to convince him that he’s not about to collapse into a pile of “parts.” If your little one is a bit of a hypochondriac, this book might come in handy—in a most hilarious way! 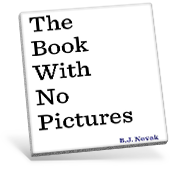 The Book With No Pictures
by B.J. Novak

This is not your typical children’s book, yet your children will want you to read it over and over again. That might be because The Book With No Pictures makes adults say whatever the book wants them to say. No matter how silly. No matter how ridiculous. And as you will soon discover, that’s hilarious. 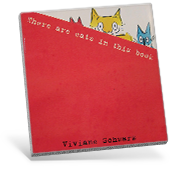 There Are Cats in This Book
by Viviane Schwarz

Your little one will have fun chasing lots of mischievous cats through the pages of this sweet and silly interactive book. Its lighthearted illustrations will make you giggle from the beginning until the very last page turn. It’s true: there really are cats in this book, and they want to play! 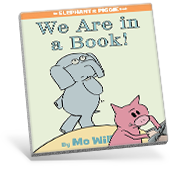 We Are in a Book
by Mo Willems

Elephant & Piggie are at their most hilarious in this slightly crazy Mo Willems classic children’s book. Read and laugh along as these two best friends discover that they are in a book! But I have a little secret for you: Elephant & Piggie make it kind of hard for you to stop reading this book! 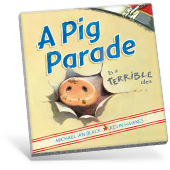 A pig parade may sound like a great idea, but after reading this book, you may begin to wonder. After all, pigs aren’t crazy about marching, and they don’t like to wear uniforms. They don’t care about floats, and they have terrible taste in music. Maybe a pig parade is a terrible idea. 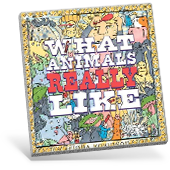 Did you know that kangaroos like to play ping pong? Really? Well, if you thought you knew what animals like, you’re in for a big surprise. In this zany book, the animals in Mr. Timberteeth’s chorus reveal what they really like. Be warned: you may be shocked at what you learn.

Do you have a favorite hilarious picture book? Please share it in the comments and I’ll add it to our Readers’ Picks list!

“Kitty Cat Plays Inside” Leveled Rigby Reader for beginners, We are of the philosophy that repeated positive exposure tp words during the first three years will teach the child to read the same manner they learn to speak, simple repetative exposure. That is why our son, who has just complete Level 1, can read third grade readers almost fluently. We read literally over 1,000 of these Leveled readers together (some over and over) from Rigby, Scholastic, Heinemann, ect, (Rigby jwere our favorite). Tangently, Your baby can Read Program was completed by 6 months old. It seems to be a well kept secret, among the Educational Leaders, that babies can read. Just think of the revelotuion this would spur, should folks catch on..

Thank you for posting this collection. We love the Piggie and Elephant books!

Thank you for posting these wonderful book lists! :)

I think someone else from my area read this. Every single one that our library has is checked out!

Cara,
Oh, no! Well, there is always the hold option!

We checked out some of these books on Monday! My boys loved There Are Cats In This Book as well as There Are NO Cats In This Book! The Interrupting Chicken was also a favorite! Thanks for the recommendations, I’ll be using these lists more often!

Megan,
You’re welcome. And thank you for the recommendation of There Are NO Cats In This Book.

Thank you for these book lists!! With three silly boys, funny books are a big hit. We also really loved The Obstinate Pen by Frank Dormer and Stuck by Oliver Jeffers.

Thank you for the additional recommendations, Erika.

My daughter loved The Book With No Pictures!

That book is one of my favorite read-alouds!

Another favorite in our house is “Skunks!” By David T. Greenberg. Wonderful ode to the “glorious stink of a skunk!”

I just “Skunks” to my library reading list. Thank you, Kathy! :)

Glad you enjoyed the list, Karen! The best books can be enjoyed by all ages. :)

My kids love Battle Bunny too! And Chloe and the Lion.

I have got to save this list of books!!! I love fun, light-hearted, animal books :) And laughter makes them instant classics!

I just love these. I always overemphasize the reading and we laugh through the entire book ;o)

The Parts books have been favorites of my boys since they were itty bitty. And my youngest really enjoys Mo WIlliams books. I will have to look into the others. Thanks for the list.

Thanks for posting this list! This will make our next library trip like a scavenger hunt to see how many of these we can find. I love the funny ones and don’t mind hearing them a few times in a row!

I love that you’re planning to turn our library list into a scavenger hunt! I hope your little hunters find all of these books!

Love this list! Sometimes we just need to take a mental break and these would be perfect for a laugh!

This is a great list. Thanks for sharing! I’ll be sure to request some at the library.

Thank you for these suggestions and thanks for including a printable list. :)

You’re so welcome, Brandi! I’m glad that you found the library list helpful. :)

Wish I had known about these books when my son was younger. A bunch of them look like fun!

C.S. Lewis said something once along the lines of, “Some day you will be old enough to start reading fairy tales again.” You’re never too old to laugh at and enjoy a children’s book, are you? :)

We LOVE Interrupting Chicken, so funny!

The book with no pictures is a favorite of ours! Such a great way to show the power of words. My kids howl with laughter when I read this to them again and again

I don’t recognize any of these books. Going to have to look for them!

Oh my this is a great list! My youngest two will enjoy it:)

If your kids love Silly Sally, they may like these other books by Audrey Woods: “King Bidgood’s in the Bathtub” and “The Napping House”!

We really love:
“Morris the Moose” by Bernard Wiseman

Thanks for the great article!

I just added this to my request list at the library. Thanks for the recommendation! :)

Definitely books to read with my boys,they would enjoy them.

Am hoping to help our struggling granddaughter.