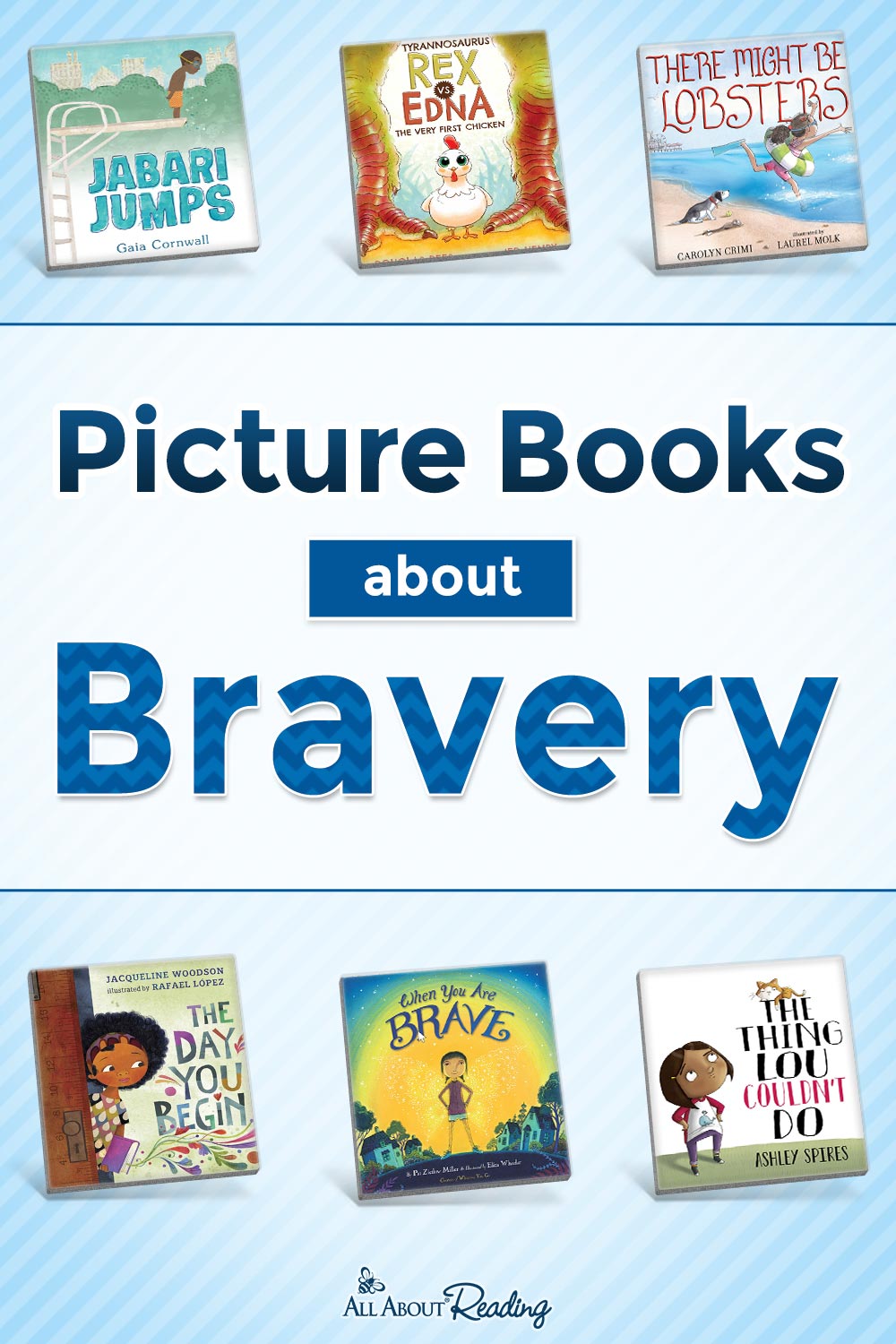 If you have a child who needs a little dose of courage, check out a few of these wonderful picture books about bravery! Each one will inspire courage, determination, and self-confidence. 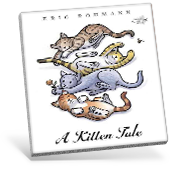 A Kitten Tale
by Eric Rohmann

In this endearing tale, we meet four kittens who have never experienced winter. Three of the kittens are anxious about facing wet snow and freezing cold, but one kitten can’t wait! Maybe when the snow finally falls, the adventurous spirit of one brave kitten will rub off on his three timid friends so they can all enjoy winter together! 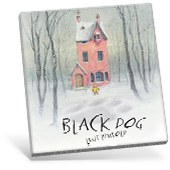 Rich, full-page paintings alongside tiny pencil drawings create the backdrop for a quirky story about a fearful family, a BIG black dog, and a little girl who proclaims that “there was nothing to be scared of.” Levi Pinfold’s tale is a delightful reminder that sometimes the thing you’re most afraid of isn’t as big (or as scary) as you think it is. 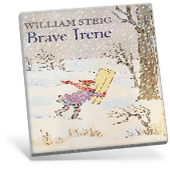 Winter is a force to be reckoned with, but winter winds are no match for Brave Irene. When a courageous little girl volunteers to venture out on an errand for her sick mother, snow and howling winds threaten to ruin everything. Can Irene make it to the duchess’s house in time to deliver the package, or will the winds of winter win in the end? 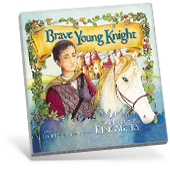 Of course everyone knows that knights have a reputation for being brave. But in Karen Kingsbury’s touching fairy tale, we learn that being the best knight requires more than bravery. In a contest with the other knights in the kingdom, the Brave Young Knight proves that the most winning traits are honesty, integrity, and strength of character. 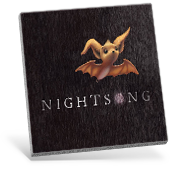 Loren Long’s captivating illustrations are the perfect complement to Ari Berk’s Nightsong, an endearing tale about a young bat learning to make his way in a dark and scary night world. At first Chiro is fearful, but he takes his mother’s advice and soon realizes that when you use your good sense, you will always be able to find your way home. 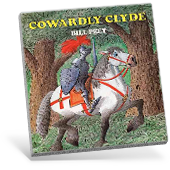 Sir Galavant is a brave knight, but he has a most unfortunate problem: his horse is anything but brave. In fact, Clyde is quite cowardly, and when Sir Galavant determines to save the village from a terrible ogre, Clyde’s cowardliness gets them into a heap of trouble. But can Clyde’s loyalty to Sir Galavant save them both? 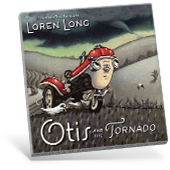 Otis and the Tornado
by Loren Long

Otis knows that he and his farmyard friends are no match for a swirling tornado. As the brave tractor leads his friends to safety, he realizes that the big, ornery bull is still locked in his pen with the tornado approaching fast. But fear is no match for Otis, and soon the barnyard animals are safe and secure…and they have a new friend. 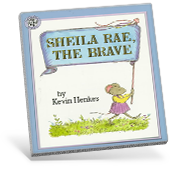 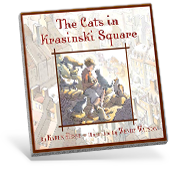 The Cats in Krasinski Square
by Karen Hesse

The Cats in Krasinski Square is the inspiring story of a young girl’s plan to smuggle food to hungry Jews in the Warsaw ghetto during the Resistance. The excitement and suspense grow as the girl and her feline friends outsmart the Gestapo in this uplifting story of bravery and survival in the most difficult of times.

The Dark
by Lemony Snicket

Lemony Snicket is a brilliant author, and only a brilliant author would think to take a child’s number one fear, give it a voice, and allow it to convince the child that there is nothing to fear. In this imaginative picture book, Laszlo and The Dark get to know each other. And as they talk, Laszlo discovers that maybe the dark isn’t so bad after all. 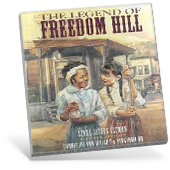 The Legend of Freedom Hill
by Linda Jacobs Altman

Told in the vernacular of the 1890s California Gold Rush, The Legend of Freedom Hill is the heartwarming story of an unlikely friendship between the daughter of a runaway slave and a young Jewish girl. When a slave catcher begins to close in on Rosabel’s mother, the girls hatch a daring plan to buy Miz Violet’s freedom once and for all. 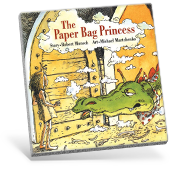 Wearing nothing but a paper bag, Princess Elizabeth goes after the dragon that burned up her castle and carried off her prince. The dragon definitely got more than he bargained for when he messed with this brainy princess. And just when you expect a page turn with a happily ever after, the fairy tale takes a surprising twist. 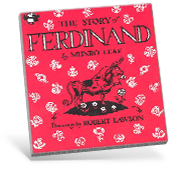 The Story of Ferdinand
by Munro Leaf

Ferdinand is a peaceful young bull. He doesn’t like to run and leap with the other young bulls, but instead prefers sitting quietly under the cork tree and smelling the flowers. But then a surprising turn of events finds Ferdinand in the bullring facing an angry matador. What do you think will happen next? 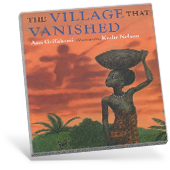 The Village that Vanished
by Ann Grifalconi

Deep within the jungle, the villagers of Yao have never had a reason to fear the outside world. But when slave traders threaten their village, two quick-thinking women and a brave girl devise a plan to fool the traders and lead the villagers to safety. Rich oil paintings and pencil drawings draw readers into this tale of courage and survival. 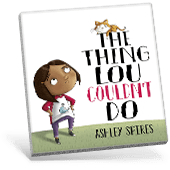 The Thing Lou Couldn’t Do
by Ashley Spires

All the kids in the neighborhood love adventure, but no one loves it more than Lou does. All their adventurous play makes her feel so brave! In fact, sometimes it seems there’s nothing Lou can’t do. At least until the kids decide it’s time to climb a tree. Has Lou finally met her match, or can she find the courage to give it a try? 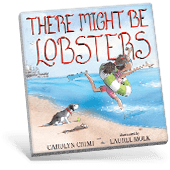 The beach is a big, scary place and Sukie is a very small dog. There are just so many frightening things at the beach. There might even be lobsters! But when Sukie’s best friend starts to float out to sea, Sukie knows she has to do something to save him—no matter what happens! 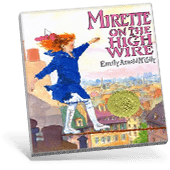 Mirette on the High Wire
by Emily Arnold McCully

In a boarding house in Paris, a young girl named Mirette meets Bellini, a daring high-wire walker. While Bellini works to regain his courage, Mirette becomes enchanted with the skill. Can she conquer the high wire and help Bellini conquer his fear all at the same time? 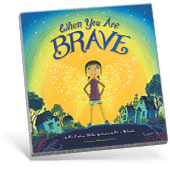 When You Are Brave
by Pat Zietlow Miller

How can you be brave when everything is changing? And how can you be courageous when the world is so scary? Maybe the bravery you need can be found inside of you. Follow along as a young girl moves to a new home and discovers how to tap into her own inner courage. 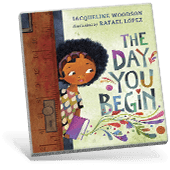 The Day You Begin
by Jacqueline Woodson

Have you ever felt a little bit different? Have you felt left out or not quite understood? What can you do when those feelings come? In this richly illustrated picture book, explore how to find a place for yourself in the world by sharing the things that make you unique! 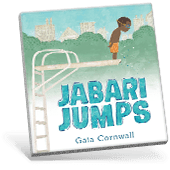 Jabari is so excited! Today is the day for his first jump off the diving board. But…maybe he should let someone else go first. Or maybe he needs to do a few stretches before taking the plunge. Will Jabari keep making excuses not to jump, or will his dad’s advice give him the courage he needs? 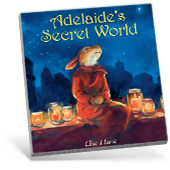 In a huge city teeming with people, it might seem impossible to be lonely—but Adelaide is. She even finds someone who could become a friend, but instead of trying to talk to him, Adelaide just runs away. Can a shy, lonely rabbit find a way to reach out and make a friend? 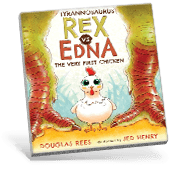 In the prehistoric forest, Tyrannosaurus Rex is feared by all the other animals—except Edna, the very first chicken. Because despite her size, Edna knows she can take on the dinosaur. You see, no matter how ferocious he is, Edna has something Rex doesn’t have—ferocious bravery! 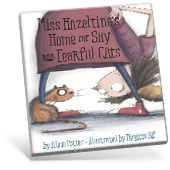 At Miss Hazeltine’s Home for Shy and Fearful Cats, timid cats learn to be brave. But for one scaredy-cat, classroom becomes real life when he is called upon to rescue the home’s missing mistress. If you have a shy and fearful child in your home, this adorable picture book is just what you need!

Favorite Picture Books about Bravery Recommended by Our Readers

Do you have a favorite picture book about bravery? Please share it in the comments below and I’ll add it to our Readers’ Picks box!

Thanks for these options. Love good quality stories of bravery for my kids.

Thank you so much for these suggestions! We have been struggling with fear and worry in our home so this is a great list for us!

I hope you find many of these books helpful, Courtney!

These are such good books. Thanks for the suggestions.

I used to love Mirette on the High Wire as a kid. I will have to get some of those other ones for my own children now!

Miranda,
One of the joys of parenting is sharing experiences, including books, that you loved as a child with your own children!

This is a great list of books on bravery. I like that there is a wide and diverse selection of books! Will definitely be looking for some of these on Libby or from our local library.

I’m glad you appreciate the list, Kwame! I hope you find lots to enjoy.

I’m a huge fan of Bill Peet so was happy to see the addition of Cowardly Clyde! So many good book options here for bravery in a world where bravery is oftentimes hard to practice!

I will be adding some of these to our library hold list.

Will have to check these books out!

Picture books are such a great entry into the love of reading!

Awesome List! Our favorite has to be Ferdinand. You can’t go wrong with a classic!

I agree, Joanna! Ferdinand is such a favorite!

This is just what we needed! Thank you for all the great suggestions!!!

These are some of our favorites! Especially Jabari Jumps. 🥰

These suggestions are great. One of my favorite it the Paper bag Princess.

What a great selection. Adding some to my wish list now!

Always looking for book recommendations, thanks!

I love the library list that is included! Thank you!

This is a great book list! “When You Are Brave” is a favorite at our house!

So many great options and many that I hadn’t heard of! Thanks so much for the recommendations!

Love this! can’t wait to incorporate some of these books into our library!

Love this. Can’t wait to try.

Most of these titles are new to me. I will see what our local library has on the shelves!