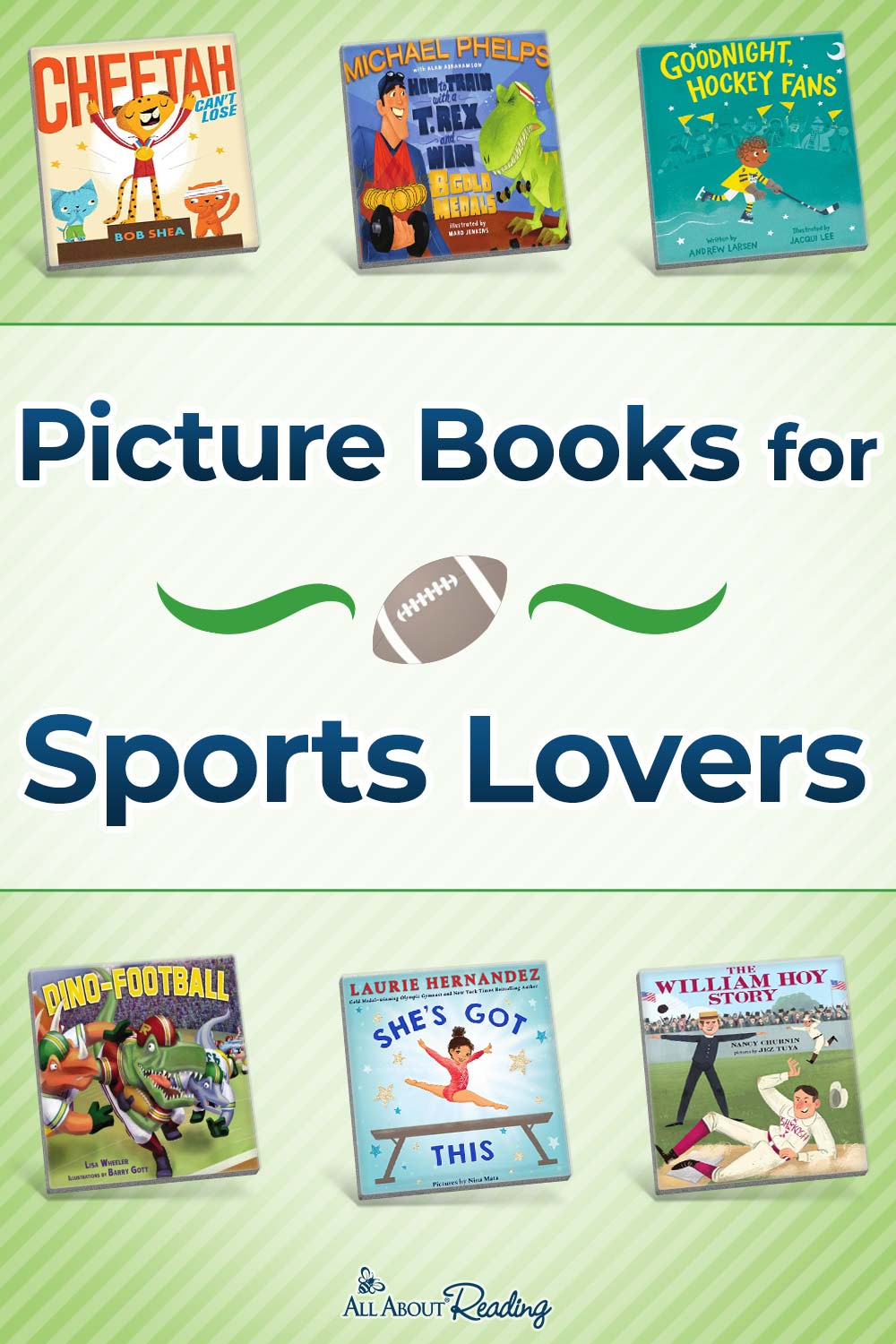 Is there a sports lover in your house? With picture books about basketball, soccer, baseball, gymnastics, skiing, and MUCH more, this list of sports-themed picture books is sure to hit a homerun…even for your most reluctant reader!

Grab this free printable list of picture books for sports lovers to take with you on your next visit to the library. 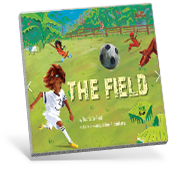 The Field
by Baptiste Paul

Vibrant illustrations and fast, snappy prose bring a colorful Caribbean world to life as a group of children gather in their favorite place to play their favorite game. They don’t even care if it starts to rain or if they have to run in the mud—just so long as they can play ball! 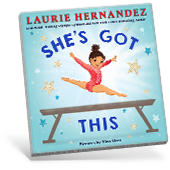 She’s Got This
by Laurie Hernandez

Zoe loves gymnastics class! She’s learning so much—from swinging on the bars to jumping and spinning on the balance beam. But then she takes her first tumble, and now she just wants to quit! Is Zoe done with gymnastics or will she give it another try? 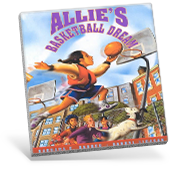 When Allie’s dad gives her a basketball, she can’t wait to try it out. But Allie just can’t make the ball go through the hoop. All the kids laugh and say girls shouldn’t be playing basketball, but Allie is determined to prove that girls can have basketball dreams, too. 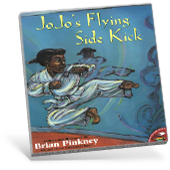 Jojo’s Taekwondo teacher thinks JoJo is ready to try for her yellow belt promotion! But to get her yellow belt, JoJo must perform a perfect flying side kick. Will finding the courage to get her promotion help JoJo conquer other fears in her life? 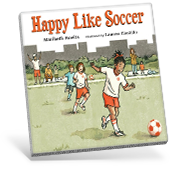 All of the other kids on Sierra’s soccer team have family to watch them and cheer them on at games. But Sierra’s aunt can’t take the time off from work to travel to all of Sierra’s soccer games. Then Sierra has an idea… but she’ll have to ask for help to make it work. 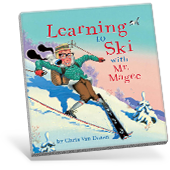 Learning to Ski with Mr. Magee
by Chris Van Dusen

How hard can it be to learn how to ski? Well, Mr. Magee is about to find out! With his dog Dee along for the ride, he’s sure he can tackle the snowy mountains—but first, he’s going to try the hill behind his house. Surely nothing can go wrong there! 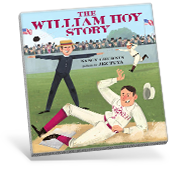 The William Hoy Story: How a Deaf
Baseball Player Changed the Game
by Nancy Churnin

All William wants to do is play baseball. He practices as hard as he can to become the best player he can be, but when he finally makes a team, the other players treat him badly because he’s deaf. Can he show them that he has what it takes to be a great player? 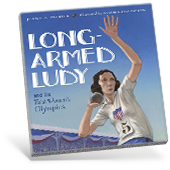 Ludy was born to be an athlete—with her long, strong arms, she could become a champion shot-putter. But with the first Women’s Olympics event right around the corner, Ludy will have to train harder than ever if she’s going to win a gold medal! 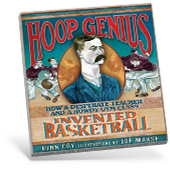 Hoop Genius: How a Desperate Teacher
and a Rowdy Gym Class Invented Basketball by John Coy

James Naismith is at his wits’ end. He’s trying to teach his school’s gym class but the students are just too wild, and every sport they try ends in disaster. They need a new game, a game meant to be played indoors—a game that uses a basket and a ball. 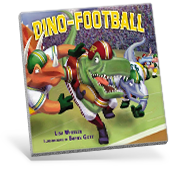 Is there any sport more exciting than football? Yes! DINO-FOOTBALL! The red team and the green team are battling it out for football supremacy in the Lava Dome while dozens of prehistoric fans cheer. Which team will win the big game? 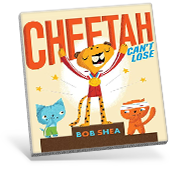 Two little cats are super excited for the Big Race—that is, until their friend Cheetah shows up. Cheetah always wins the Big Race. So the cats hatch a plan to make sure that Cheetah can’t win…but is winning the race really more important than having a friend? 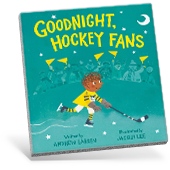 It’s not fair! A little boy just wants to stay up to watch the hockey game, but it’s past his bedtime. So instead of going to sleep, he turns on his radio and listens to the announcer describing every play of the game. And soon the boy is dreaming that he’s in the game! 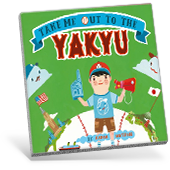 Take Me Out to the Yakyu
by Aaron Meshon

Baseball is popular in the United States, but it’s a fan favorite in Japan, too! Follow one little boy and his grandfather as they enjoy baseball (or yakyu!) games in both countries. The customs and the words might be a little different, but the game is the same no matter where you go! 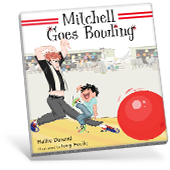 Things can get pretty crazy when Mitchell’s around—he just can’t stop knocking things down! So his dad takes him to the bowling alley, where the whole point of the game is knocking things down. But Mitchell quickly discovers it takes skill to become a good bowler. Can he beat his dad? 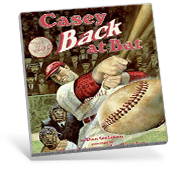 Casey Back at Bat
by Dan Gutman

Everyone has heard how Casey struck out and lost the baseball game for his team and for the whole town of Mudville. But do you know what happened in the next game? This rhyming picture book continues the story with a baseball tall tale that’s sure to be a hit! 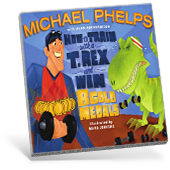 How to Train with a T. Rex
and Win 8 Gold Medals
by Michael Phelps

Have you ever wondered what it takes to win a gold medal? In this humorous picture book, Michael Phelps, one of the world’s most decorated Olympians, shares his secrets. Could you swim the entire length of the Great Wall of China…three times? 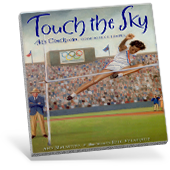 Alice Coachman has always been athletic, even as a little girl in Georgia jumping over rags tied between sticks. But now she has her eyes on the biggest goal of every athlete: a gold medal at the Olympic Games. To win, she’ll really have to touch the sky! 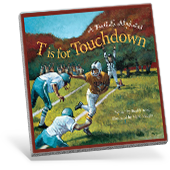 T Is for Touchdown:
A Football Alphabet
by Brad Herzog

If you’re looking for the perfect way to introduce your kids to football, this fun and informative picture book is a great choice. Each letter of the alphabet teaches something about the sport, from A for Athlete to Z for Zebra-striped shirts! 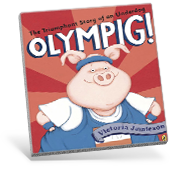 Olympig! The Triumphant Story
of an Underdog
by Victoria Jamieson

Boomer the pig is ready for the Animal Olympics! He’s practiced hard, and he’s sure he has all the events in the bag. But no matter how hard he tries, he loses event after event. Finally he gets so angry, he storms out of the arena. Is this how Boomer’s Olympic dreams are going to end? 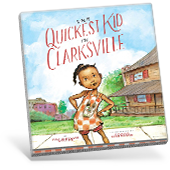 The Quickest Kid
in Clarksville
by Pat Zietlow Miller

Alta can run! She’s the quickest kid in Clarksville … that is, until a new girl tries to steal Alta’s title. Maybe the two fastest girls in town can find common ground when Olympic runner Wilma Rudolf returns to Clarksville. After all, there’s no disputing that Wilma is really the fastest girl in town!

Would you like to read some of my favorite picture books for sports lovers with your children? Download our Picture Books for Sports Lovers Library List.

Do you have a favorite picture book for sports lovers? Please share it in the comments and I’ll add it to our Readers’ Picks box!

Picture Books for Sports Lovers Recommended by Our Readers

Thanks for book recommendations! We love books and hope you liek these too!
Sometimes You Win, Sometimes you Learn For Kids! by John C. Maxwell
The Three Ninja Pigs by Corey Rosen Schwartz
Number One Sam by Greg Pizzoli

Thanks for the recommendations, Nicole. These sound really good!

Thank you for this list! I also have to say how much we love the All About Reading reader books! The stories in them are actually interesting to a kid. I have taught in a “regular “ classroom for 15 years, and I have never seen any reader that keeps the attention of young learners like these. Right now, I am tutoring a 7 year old dyslexic boy who struggled through two school years and hated reading class. Yesterday, he told me after he finished the day’s lesson just how much he likes these stories! He can’t wait to finish the book so he can bring the book home and read it to his family! The stories are just the right combination of silly and believable. Only two lessons to go in level one!!!! He is so proud of himself! And I am so happy for him and the progress he is making! Yes, it is still hard work, but at least now the work is fun and he can see that there is hope! Thank you!

This was so wonderful to read, Sherry! I really appreciate your experienced opinion of the All About Reading stories, but most of all it is heartwarming to know how well this boy you are tutoring is doing with All About Reading and the excitement and enjoyment he is having with it! Thank you for sharing this.

Let him know that we at All About Learning Press are proud and happy that he is so close to finishing level 1! Keep up the amazing work!

These look like a wonderful addition to our homeschool library!

Glad you like the look of these, Maureen! I hope you enjoy them.

Do you mean All About Reading and All About Spelling, Michelle? You can start to learn more with our Why Our Programs Work video. It gives a nice overview. Let me know if you have questions or need more information.

So many great books! We love All About Learning!

I’m sure my kids would love these!

We are always looking for good books. These look great, thanks!

You’re welcome, Kendra! I hope you find a lot to enjoy.

I see some soccer ones! My kids love soccer. Thanks we will check these out!

I hope your sons enjoy them, Floriana!

My kiddo would love these! I’ll have to check em out. Thanx

Such fun books! Thanks for sharing.

This all looks so great! Would love to use this for our homeschool!!

Such great ideas thank you

Thank you for sharing.

Jray,
I’ve not read that one, but the title alone made me smile! And who doesn’t love an underdog story?

What a great collection of resources to engage any reader! Thank you!

I like the book JoJo’s Flying Sidekick. We could use that book in our house.

Thank you for providing such a great selection of books for the kiddos that love sports. Just what I was looking for. Thank you.

I’m glad this was what you were looking for, Jessica!

Putting some of these on hold at my library. Thanks for the suggestions.

You’re welcome, Rosa! Isn’t it nice to be able to put a book on hold and have it just ready for you to pick up?