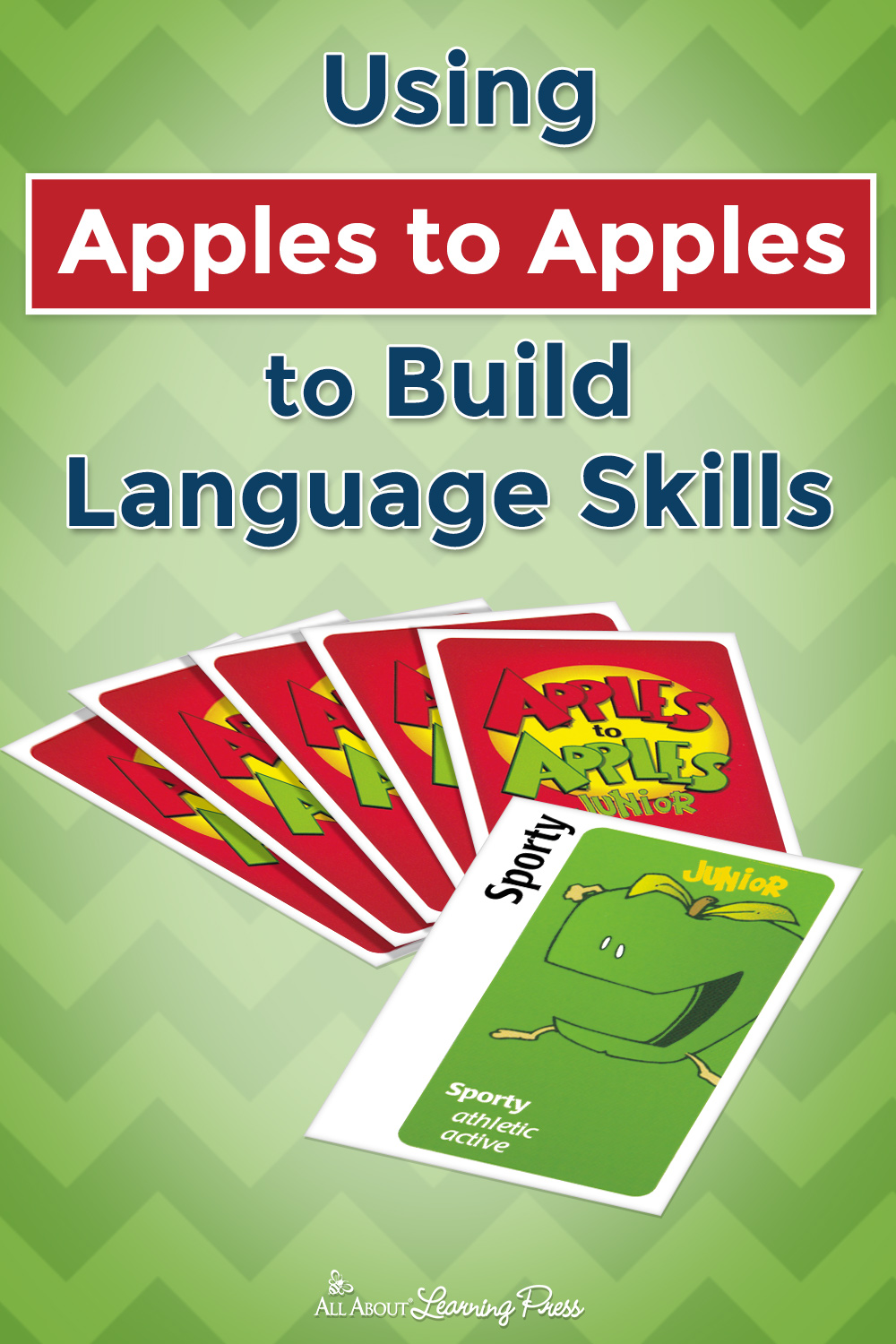 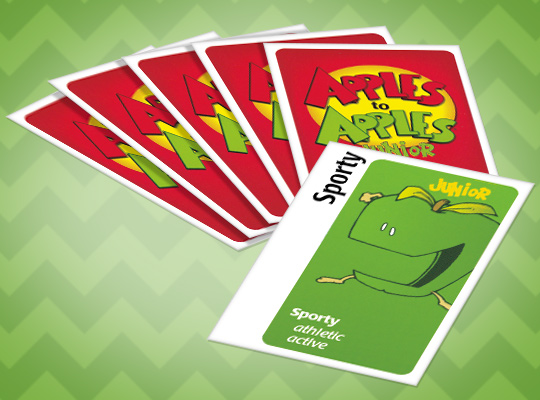 If you’re looking for a new game to try, look no further than Apples to Apples Junior! This fast-paced card game is not only a ton of fun, it’s also a wonderful way to expand vocabulary!

One of the most appealing things about Apples to Apples is its simplicity. Unlike some games that require a thorough briefing before play begins, this one is easy to explain in just a few sentences.

You’ll need at least three people to play, but it is even more fun with a larger group. The suggested age range is nine and up, but younger children should have no problem successfully playing this game in a family setting with help from Mom and Dad! Gameplay lasts 30-60 minutes.

Players take turns being the judge of each round. Let’s say your friend is the judge of the first round. She deals five red cards to each player. You look at your cards, but you don’t show them to anyone else. 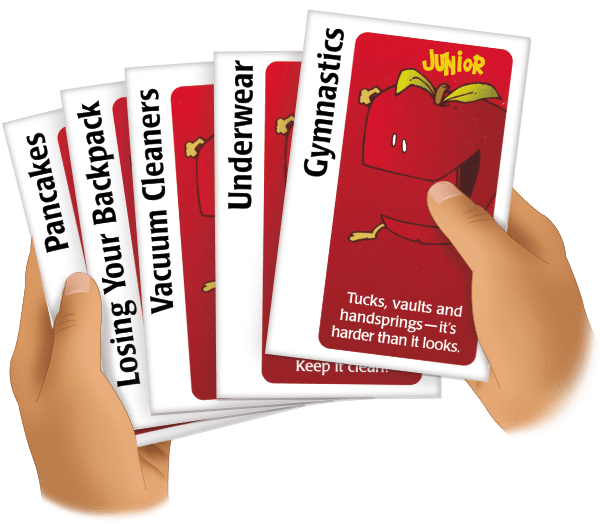 Now the judge lays down one green adjective card. See how there are two synonyms on the card? It can be fun to consider the shades of meaning between the synonyms.

Look at your cards and decide which one is the most sporty.

Now you make your final selection and lay it face down on the table alongside the cards selected by the other players.

The judge shuffles the red cards so she doesn’t know who tossed in which card. Now her job is to decide which card best fits the word sporty. There’s a bit of friendly banter as players try to encourage her to pick a particular card—either their own or the one they think is best. Spirited discussion is allowed, and the judge doesn’t even have to pick the card that makes the most sense. The judge might just like the creativity (or humor!) of a particular card. 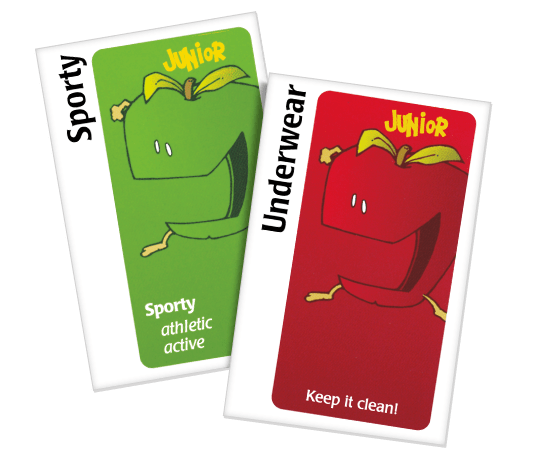 The judge picked your card! I guess underwear is sporty, after all! That’s one point for you, and the first player to earn five points wins the game!

5 Ways to Build Language Skills with Apples to Apples

Notes from Our Game Testers

Does your family have a favorite board game that is a fun and “sneaky” way to build language skills? Please share in the comments below.

I’m sorry for the misunderstanding, Amelia. This is our review of the board game.

However, we have lots and lots of printable games and activities available. Check out our Free Resources page for some of them.

My daughter loves this game. I wish there was a way to play it with just two players.

I know what you mean, Jennilyn. If you do a search for “Apples to Apples with two players”, you will find a few options that creative people have come up with.

I didn’t realize there was a junior! We’ve been using the older version, which the love, but this might be extremely helpful. I will definitely be purchasing asap! Thank you

You’re welcome, Kerai! I love the original Apples to Apples, but some of the references are just above younger players’ heads. I don’t know many 10-year-olds that can make connections to cards like Georgia O’Keefe or Bates Motel. The Junior version has cards that are more relevant to younger players.

My son loves games so these recommendations help. He also loves the Reading Games with Ziggy Zebra so I’m glad we got that with our level 1 program.

I’m pleased to hear your son loves the Reading Games with Ziggy the Zebra, Nicole!

just wonderful thanks and keep save

We bought this game but still haven’t played it! We will have to start playing now that I know it’s educational 😆 Thanks for the post!

You’re welcome, Amanda. I hope you enjoy it!

What a great idea!!!! I think kids learn so easily when playing games.

We agree, Marisca! Learning is better when it is fun.

Oh, awesome ideas. This will make great Friday activities for us – a little bit more relaxed than the rest of the week, but still sneaking in some learning.

Great minds think alike, David! We regularly did game learning and review on Fridays when my kids were younger.

Adding games to our homeschool has been a total game changer. Will definitely need to look into this one too!

I hope you enjoy this game too, Summer. Game learning is so much fun!

Such a great idea! I have a tendency to be so serious… but my son LOVES games and this is such a great idea to HAVE FUN in our learning together! Thank you so much for the suggestion! I look forward to trying it!

You’re welcome, Shannon. I hope you have lots of serious fun learning together with this game!

Joy,
Apples to Apples Junior is rated for ages 9+, although I think somewhat younger students would do well with help.

We have three different Apples to Apples games, and the whole family enjoys them. I always recommend them!

This is a great game . Thanks for the tips

We love this game!

Boggle has been great for practicing spelling and rapid word recognition.

We agree, Kim! We discuss it in our Using Boggle to Build Language Skills blog post.

That’s a fun idea! My kids love Apples to Apples

We have never actually played apples to apples, we will have to check it out!

That looks fun! We need to add more fun to our school day so I may need to incorporate this.

My kids love Apples to Apples. Thank you for the tip!

My kids are finally getting old enough to enjoy Apples to Apples Jr. and I’m so excited to add this into our homeschool game days. Thanks for the idea!

You’re welcome, Danielle. I hope you have lots of fun with this learning!

What a great idea! I love Apples to Apples, but never would’ve thought of this.

Thank you for the great idea! Any time you can add games in for learning everyone wins!

I think we’ll need to add Apples to Apples Jr to our wish list this year. I bet the kids would get a kick out of this game.
Thank you for the suggestion!

What a great idea!!!

I’ve been looking for games the whole family can play together and this looks like something worth trying. The added bonus of vocabulary is a plus for sure.

Packing this on our camping trip! Thanks for the tip!

Such a great idea! My kids love play board/card games, and they don’t even realize how much they are learning. But sometimes, as mom & teacher, I get so focused on what we need to do (especially when I am worn out or overwhelmed) that I forget to shake things up, make it fun, and add in games.

we have apples to apples long before kids! used it for pg game nights with friends!