B Is for Buzzing Bumblebee 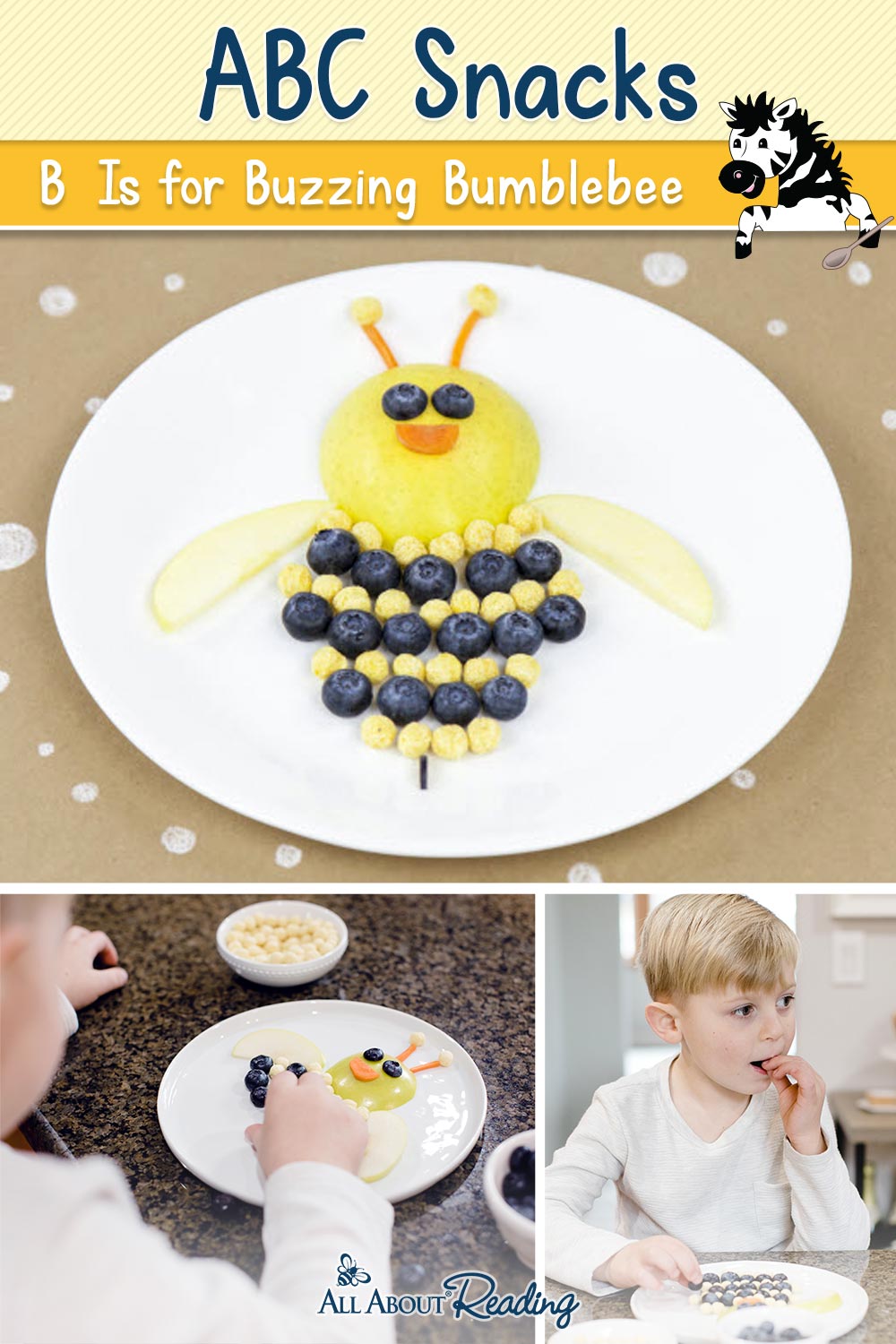 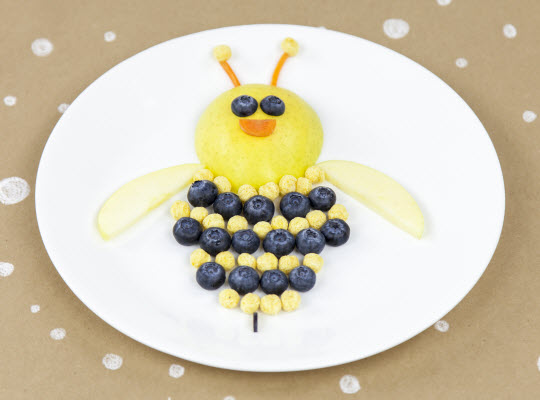 Preschoolers usually aren’t fond of bumblebees, but this is one bee that won’t create mayhem when it starts buzzing around your kitchen.

Our most recent ABC Snacks recipe takes something potentially scary and turns it into something that’s sweet enough to eat. It’s a honey of a healthy snack that’s easy to make and even easier to eat—even for the littlest bee in your hive!

But this snack isn’t just about the alphabet. In addition to practicing the letter B while you create your bumblebee, you can work on counting, too!

While your preschooler assembles his bee, have her count the blueberries and cereal pieces as she places them in position. We had a cute helper for our bumblebee snack, and I think he would agree that it was a buzzing success! 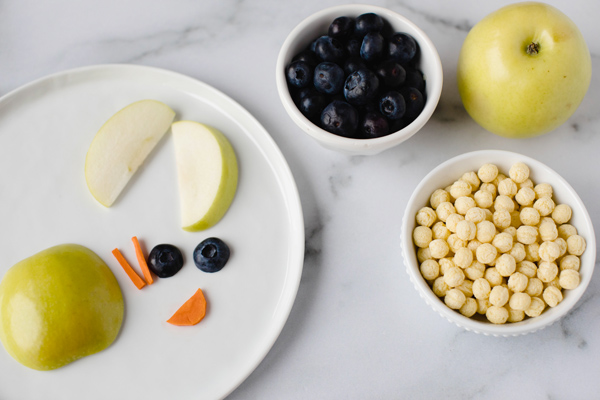 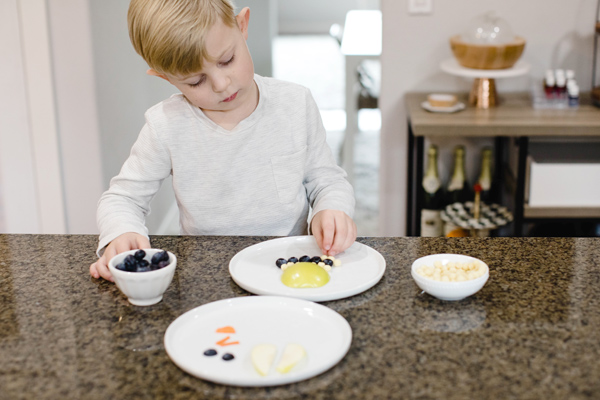 Here’s what you’ll need to make this snack for one child: 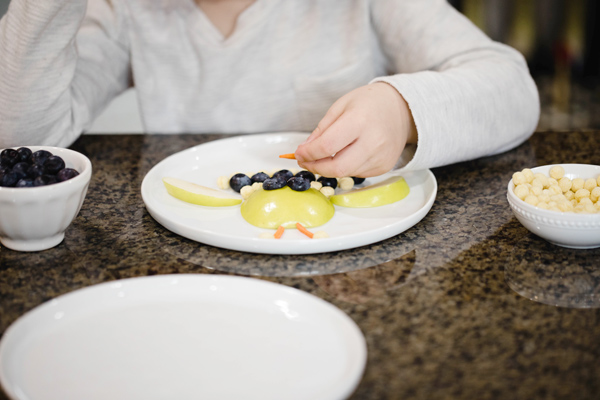 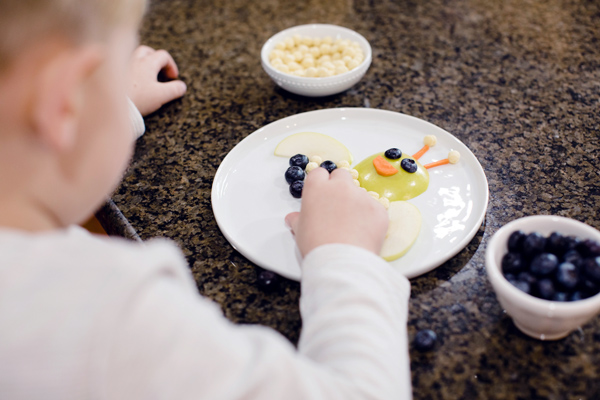 Want More Snacks that Start with B?

For snacks that start with B and many more, get the entire series of ABC Snacks Cookbooks with more than 40 snack recipes for your preschoolers!

I just love these abc snacks. They are the cutest food I’ve ever seen!

Elaine,
I agree! But even better, to me, is that they don’t take crazy amounts of preparation. These are cute, AND doable.

I have little ones that would love this!

Makes me wish mine was still in preschool. We may have to make these anyway and call it non-fiction reading practice.

I love all the letter snack ideas, thanks for sharing!

This looks so adorable. What a great way to introduce letters and letter sounds!

Love the idea. Thanks

I LOVE this snack! My kids are actually fond of the bees. We welcome them to our yard every spring and watch them work on our various flowers :-) They’re going to love it when we make this one! Thanks for the super simple snack idea!

You’re so welcome, Jenny. We’re pretty fond of bees here, too. In fact, we call our office “The Hive.” You can only begin to imagine all the honey and bee puns we have at work. (We even have a beehive-shaped cookie jar in our kitchen!) It’s a lot of fun! So naturally, we wanted to create a bumblebee snack. :) Enjoy!

Such a cute and clever idea AND includes the go to foods my 4 year old will always eat. Thanks!

You’re so welcome, Scarlett! It’s nice to know that we hit the trifecta between cute, practical, and delicious!

Cute idea! I love doing special snacks for my kids. This is a great one for summer.

Thank you for the cute idea! My little ones love edible crafts!

That is so cute! I know a few preschoolers who would love this snack/activity :-)

Awww… I love knowing that we made a few preschoolers happy. :)

That is so cute!

Wow! What a cute idea!

This looks so cute! And fun. I bet my kids would love making up different ones themselves.

Please encourage them to do that, Sarah! We were hoping that this snack would not only be a boon for fostering creativity, but a great activity for practicing fine motor skills too. Let them play! Hope you have fun!

What a grea idea!! Maybe this will get my son eating a little!

What a cute idea!

Kiddos will love this!!!

My B-B-Benjamin would love this!

Ha, ha! I like how your B-B-Benjamin goes along perfectly with the alliteration in this b-buzzing b-bee snack. :)

Ooooooooooooo…can’t wait to make this with my nephew :)