Holiday Picture Books Around the World 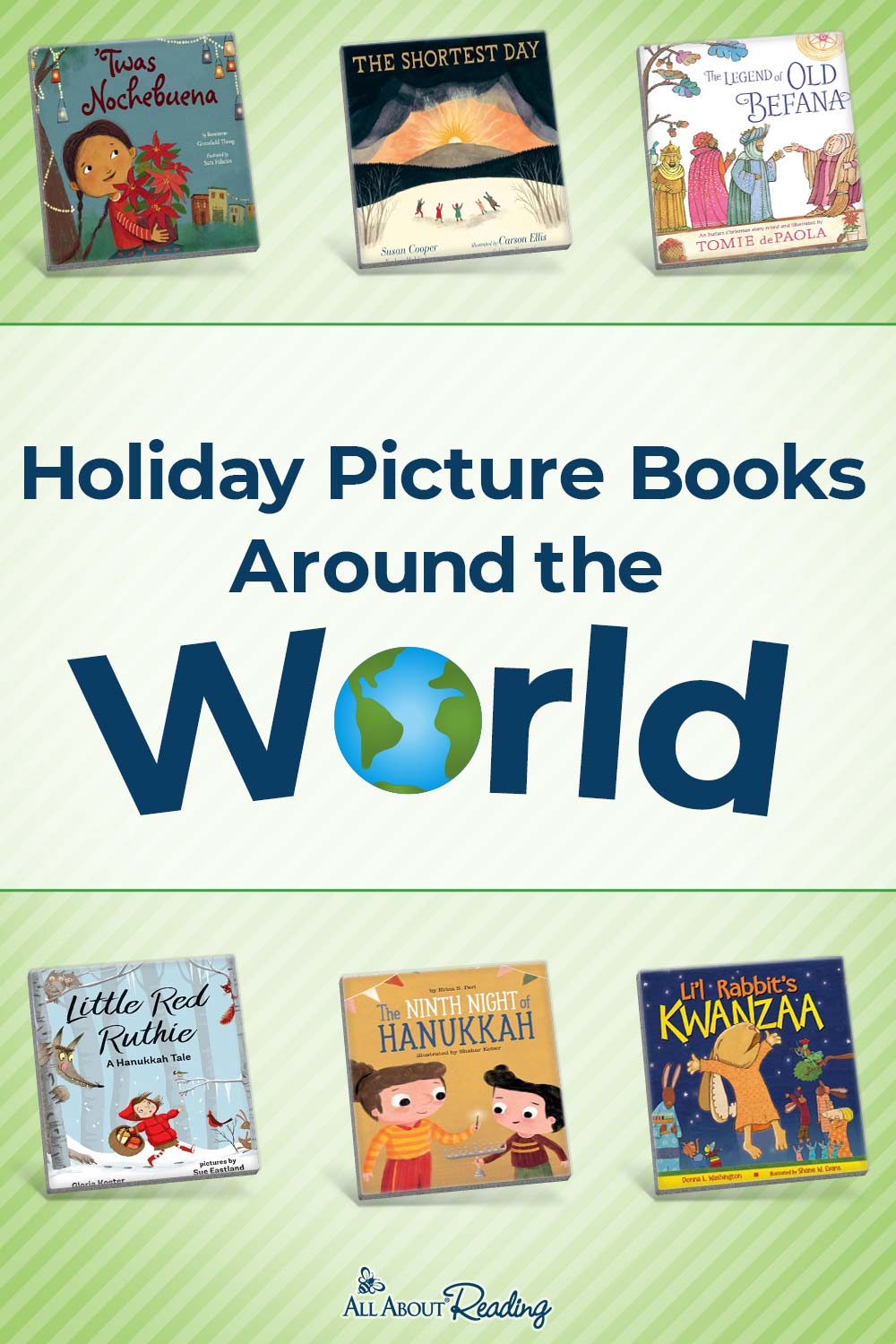 The holidays are a special time, and this wonderful collection of picture books celebrates the rich diversity of holiday traditions practiced by people all around the world. After all, no matter where you live or how you celebrate, this is the most wonderful time of the year! 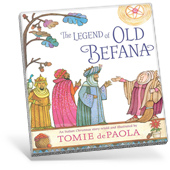 The Legend of Old Befana:
An Italian Christmas Story
by Tomie dePaola

(Italy)
Every day, cranky Old Befana works hard, sweeping her house, her steps, and her walkway. But no one seems to know why. That is, not until three kings arrive at Befana’s house enroute to Bethlehem to see a newborn king. Old Befana wants to take gifts to the baby, too—but how will she get there? 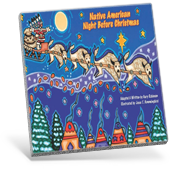 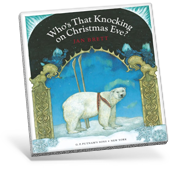 Who’s That Knocking on
Christmas Eve?
by Jan Brett

(Norwegian/Arctic)
One chilly Christmas Eve, a boy and his pet polar bear stop at Kyri’s house to rest. Kyri warns them that every year on Christmas Eve, her cabin is invaded by trolls who come to gobble up the special feast she has prepared. But maybe this year, things will be a little bit different… 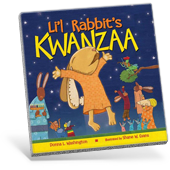 (Kwanzaa)
Kwanzaa is hard for Li’l Rabbit because he’s just too little to help with the preparations. But one thing Li’l Rabbit loves is the big feast of Karamu. Unfortunately, Granna Rabbit is sick and can’t prepare the feast. With a little help, maybe Li’l Rabbit can give Granna a special gift! 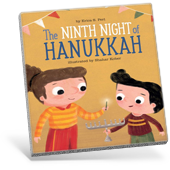 The Ninth Night of Hanukkah
by Erica Perl

(Hanukkah)
It’s Max and Rachel’s first Hanukkah in their new house—but where is their Hanukkah box? Can they celebrate their favorite holiday without their menorah, their dreidel, or their father’s lucky latke pan? But Max and Rachel may discover that Hanukkah can be special even without the trimmings. 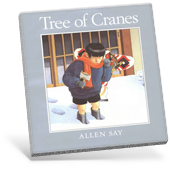 Tree of Cranes
by Allen Say

(Japan)
After a little boy disobeys his mother and visits the neighbor’s pond, he’s afraid his mother will be angry with him. And it certainly seems that something is wrong. His mother is acting so strangely: folding paper cranes and digging up a tree in the garden. Is there is a reason for it all? 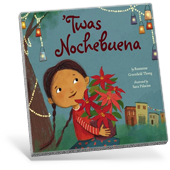 (Central America)
Everyone knows the traditional “‘Twas the Night Before Christmas” poem, but this delightful new version celebrates Hispanic culture and holiday traditions. Take a seat at the table and join the family fiesta with fun, food, and festivities—and learn a little Spanish along the way! 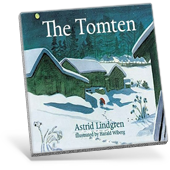 The Tomten
by Astrid Lindgren

(Sweden)
In Sweden, there are many legends about the tiny, bearded troll known as the Jultomten, and this picture book tells one of the sweetest. In this lyrical tale, the Tomten arrives at a sleepy, snow-blanketed farm and visits all the animals who live there, reminding them that spring will come again soon. 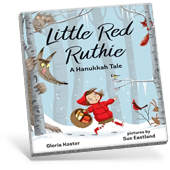 (Hanukkah)
This fresh take on a classic fairy tale features a spunky new heroine: Little Red Ruthie! While on her way to her Bubbe Basha’s house, Little Red Ruthie dreams of eating her Bubbe’s wonderful latkes, but she soon runs into a scheming wolf who thinks Ruthie will be the perfect Hanukkah snack! 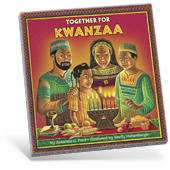 Together for Kwanzaa
by Juwanda G. Ford

(Kwanzaa)
Kayla loves celebrating Kwanzaa with her family. In fact, it’s her favorite time of year! But this year a snowstorm may keep Kayla’s brother away–and Kayla knows Kwanza won’t be the same without Khari. But there may be a way for Khari and Kayla to spend the holiday together. 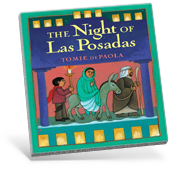 The Night of Las Posadas
by Tomie dePaola

(Mexico)
Sister Angie has been leading the Las Posadas celebration for years, and this year she’s especially excited to have her niece and nephew playing the parts of Mary and Joseph. But when Angie catches a cold and a snowstorm threatens to ruin the pageant, help arrives from an unlikely source. 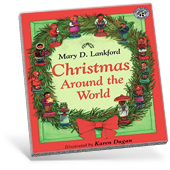 Christmas Around the World
by Mary D. Lankford

(Multicultural)
Experience the diversity of Christmas in a dozen different countries with traditions like Filipino lanterns, candlelit Swedish crowns, a Canadian parade of ships, and much more! This collection of rich holiday celebrations is your family’s passport to Christmas Around the World. 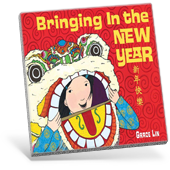 Bringing In the New Year
by Grace Lin

(Chinese New Year)
The Lunar New Year is here with all its color, excitement, and traditions! Every page of this vibrant picture book hums with activity as a Chinese family prepares for their big February celebration. Join in as they prepare favorite foods, don festive outfits, and wake up the New Year dragon! 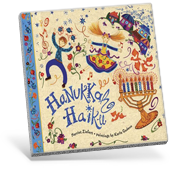 (Hanukkah)
Celebrate the coming of Hanukkah with this engaging interactive picture book! Read aloud each perfectly crafted haiku as you learn a new Hanukkah tradition and add a candle to the ever-growing menorah. Brightly colored illustrations will draw you in, bringing you back to this delightful book again and again!

The Baker’s Dozen
by Aaron Shepard

(St. Nicholas)
In this gorgeously illustrated picture book, Van Amsterdam–an honest-to-a-fault baker–refuses to give a thirteenth St. Nicholas cookie to an old woman who only paid for a dozen of his delicious treats. His lack of generosity proves unlucky, as his shop mysteriously begins to lose business.

(Sweden)
On December 13, Swedish families celebrate Lucia Day with special foods, costumes, and a crown of candles. And now, with this fun and informational picture book, your family can celebrate Lucia Day along with the Svensson children. Be sure to check the back of the book for recipes, songs, and more! 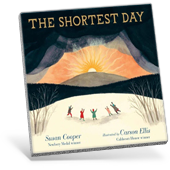 The Shortest Day
by Susan Cooper

(Winter Solstice)
The shortest day of the year may not seem like an obvious cause for celebration, but this poetic picture book will make you think differently! Ancient cultures recognized the shortest day as a day of festivity, rebirth, and hope, and this book can help your family do the same! 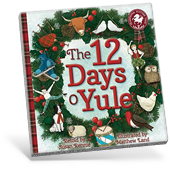 (Yule/Scotland)
This charming Scottish version of “The 12 Days of Christmas” is sure to bring a bonny smile to the face of readers young and old! But instead of French hens, gold rings, and swans a-swimming, you’ll sing your way from one reid robin all the way to twelve dirlin drummers, and you’ll be glad you did!

(New Year/Multicultural)
Oh no! Shanté’s Grandma forgot to buy black-eyed peas for her family’s traditional New Year’s celebration dinner! Now Shanté is on a mission to find black-eyed peas. But when she discovers her neighbors don’t celebrate the new year the same way her family does, what will Shanté do? 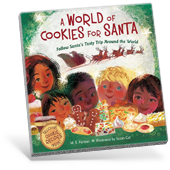 A World of Cookies
for Santa
by M.E. Furman

(Multicultural)
This clever tour of tasty Christmas traditions travels the globe with stops in the United States, Poland, Egypt, and beyond! Learn about the traditional (and delicious!) treats that children from all around the world leave out for Santa Claus, the Wise Men, and Baba Noel on Christmas Eve!

Would you like to read some of my favorite holiday picture books with your children?

Do you have a favorite holiday picture book from around the world? Please share it in the comments below and I’ll add it to our Readers’ Picks box!

How fun, hope you enjoy them!

What a fun way to spend school time during the holidays! Thanks for the list!

We have several of these books, and some of them are our most favorite holiday books. Great list!

I always forget about adding in cultural Christmas books. Thank you for the reminders with this great list of books?

I appreciate the diversity!

What a great resource for this holiday season! Thank you!

Excellent and diverse book list. Thank you for the information

You’re welcome, Gwen. I hope you find a lot here to enjoy.

I downloaded the list for us to be able to read the books. This looks like a great listing!

This is an awesome list! Thank you for sharing! I’m searching our library catalog for them now.

My son loves geography, so this will be fantastic for him. What a great list, thank you!

You’re welcome, Amanda! I think this would be a very fun way to do some geography study.

What a fabulous post!! I love all the fun picture book suggestions! Thanks!!

We learned about Lucia Day last year and loved it!

Thank you so much for this list! I am excited for our trip about the world through these books!

You’re welcome, Jessica! I hope you find lots to enjoy.

Thank you so much for this list. I cannot wait to start ticking off books.

You’re welcome, Jodie. I hope you find lots to enjoy!

My favorite is The Christmas miracle of Jonathan Toomey.

Thank you for the recommendation, Krysten.

This is a wonderful list. I love that you make it downloadable to bring to the library!

All of these books look like terrific additions to my classroom library!

The Legend of Befana is one of my favorites! I love introducing my kids to traditions from around the world. I hope they will be more open to other people’s backgrounds and opinions.

I’m glad to hear you have enjoyed The Legend of Old Befana, Kaytlyn! It’s good to know others like our recommendations too.

To be honest, we have not read any of the books because we have limited access to English books. I haven’t taught in an American-based school for so many years since I moved so many times. I sure would appreciate having an access to some good books for my son to read.

The 12 Days of Christmas!

We LOVE the book Santa Mouse

My favorite picture book is Stellaluna! I always thought he illustrations were gorgeous and the story is so sweet.

Stellaluna is such a lovely book, Brittany! We recommend it in our Picture Books that Celebrate Difference blog post!

Thank you for sharing so many amazing picture books! I am homeschooling my children for the first time this year and SO excited to teach them about different holidays around the world.

You’re very welcome, Kyla! I’m glad we can help you with your first year of homeschooling with this.

If you need anything, just ask. I love to help!

My favorite since i was a kid in the 70’s was Halloween book by teacher Edith Battles called The Terrible Trick Or Treat.

Thank you for the recommendation, Jodi!

My favorite holiday picture book is the Littlest Angel by Charles Tazewell.