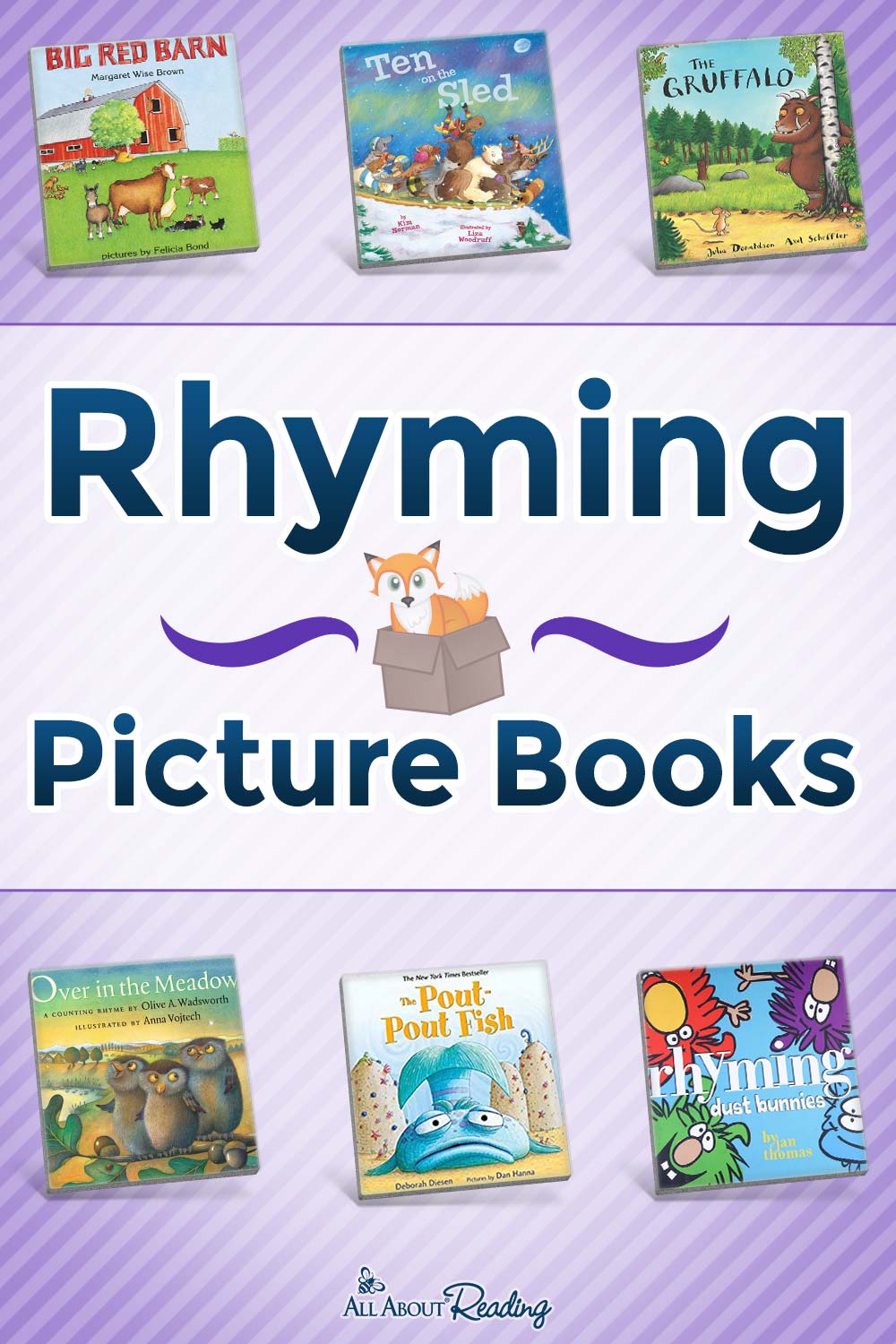 If you’re looking for the best rhyming picture books, you’re in the right spot! Here’s a wonderful selection of books that you can enjoy with your children. These books are enjoyable in their own right, but as a side benefit, rhyming books also help develop phonological awareness, which is an important precursor to reading.

Read a brief synopsis of each book below, then download my free library list to take with you on your next visit to the library. 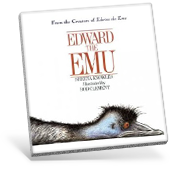 Edward the Emu
by Sheena Knowles

In delightful rhyming couplets, Sheena Knowles spins the tale of Edward, an emu who has decided that life as an emu is simply a bore! But after trying out life as a seal, a lion, and even a snake, Edward realizes that maybe life as an emu isn’t so bad after all. 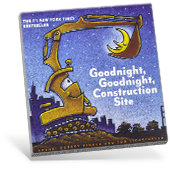 The lilting cadence of a construction site going through its bedtime rituals will help power down your child’s engine and encourage sweet dreams. With its gentle rhymes, Goodnight, Goodnight, Construction Site quiets your little truck lover to get him ready for bed. 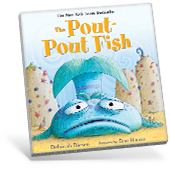 The Pout-Pout Fish
by Deborah Diesen

Deborah Diesen’s The Pout-Pout Fish is a perfect read-aloud. The repetition, rhyming, onomatopoeia, and even some pretty big words are perfectly placed in this fun book. Your child won’t even realize he’s swimming in a sea of language concepts. 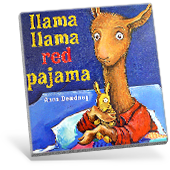 Llama Llama Red Pajama does wonderful double duty as a rhyming picture book and a perfect book for bedtime. The lilting rhythm and rhyme of Anna Dewdney’s story will gently quiet your restless little one while reminding him that he doesn’t need to be afraid. It’s a security blanket in the form of a picture book—perfection! 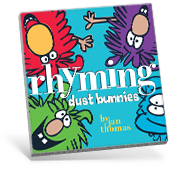 The cast of characters in Rhyming Dust Bunnies—Ed, Ned, Ted, and Bob—have a little problem: Bob doesn’t rhyme. But despite Bob’s inability to conform, this book is the perfect introduction to rhyming. And though Bob’s words don’t rhyme, his slightly out-of-sync words might be trying to tell his friends something very important! 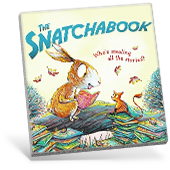 The Snatchabook
by Helen and Thomas Docherty

Another perfect picture book for bedtime, The Snatchabook has a bit of everything—softly flowing rhymes, a dose of mystery, and a dollop of sweet sentiment. The story begins in a little town where “in every house, in every bed, a bedtime book is being read.” But when a bedtime book goes missing, there’s a big mystery to solve! 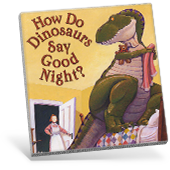 How Do Dinosaurs Say Goodnight?
by Jane Yolen

If you have a child in your home who is a master staller when bedtime rolls around, you might want to get your hands on a copy of How Do Dinosaurs Say Goodnight? This hilarious rhyming picture book just may convince your little one that his I-don’t-want-to-go-to-bed antics aren’t acceptable…even for a dinosaur! 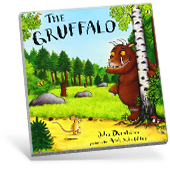 The Gruffalo
by Julia Donaldson 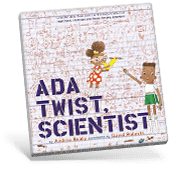 Think a girl can’t be a scientist? Just ask lady scientists Ada Lovelace, Marie Curie…or Ada Marie Twist! This rhyming book is about a girl whose curiosity can’t be squelched…not by her frazzled parents or by her somewhat flummoxed teacher. But then, maybe Ada’s constant questions and chaos are a sign that she’s going to be something special! 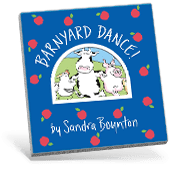 Get ready for a Barnyard Dance! You’ll be bowing with the horses, twirling with the pigs, and spinning with the chickens. You’ll be stomping, clapping, bouncing, strutting, sliding, promenading, and trotting. With an oink and a moo, and a quack, quack, quack, Sandra Boynton’s catchy rhythm and rhyme is simply irresistible. 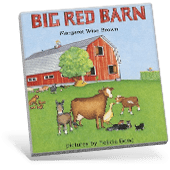 From sunrise to sunset, the Big Red Barn is just teeming with activity! There are pigs and horses, sheep and goats, geese and cows. There’s a bantam rooster and a little bantam hen. And of course, there’s an old black cat and a big red dog. Margaret Wise Brown’s rhyming barnyard classic is just perfect! Join the fun! 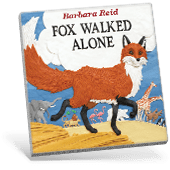 When Fox wakes from a nap, he sees an unusual sight. Animals of all kinds are passing by. He has no idea where they’re headed, but the foreboding skies and whistling wind convince Fox he had better tag along. Two by two, the animals continue on their way…with more animals joining as they go. Where do you think the animals are going? 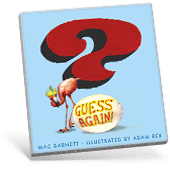 Children love to rhyme, and they love to giggle too, and Mac Barnett’s delightful picture book will have your little ones rhyming and giggling all at the same time. You see…this is not your ordinary rhyming book! That’s because just when you think you’ve figured out the rhyming word that comes next, you turn the page and … Guess Again! 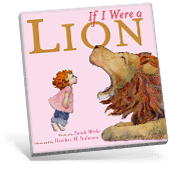 If I Were a Lion
by Sarah Weeks 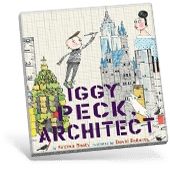 Young Iggy Peck is an architect. From the time he was two, Iggy has been building things. He built a tower with diapers and glue and a sphinx from clods of dirt. He built churches and chapels from peaches and apples and a castle with chalk. But not everyone is impressed with Iggy’s skills–that is until he builds a bridge that saves the day! 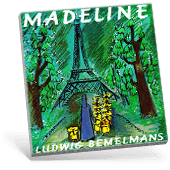 In an old house in Paris that was covered with vines lived twelve little girls in two straight lines. And one of those little girls is Madeline. First published in 1939, this beloved rhyming picture book has been making children smile for decades. Its delightful plot and predictable rhyme make Madeline the perfect bedtime read-aloud! 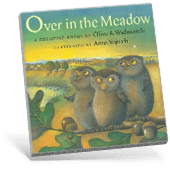 Over in the Meadow
by Olive A. Wadsworth

You may find your library shelves filled with wonderful versions of Over in the Meadow, a classic nursery song from the late 1800s. This delightful version pairs Olive A. Wadsworth’s poem with brightly-colored illustrations by Anna Vojtech. It’s an engaging exercise in counting and rhyming that you and your child will both love. 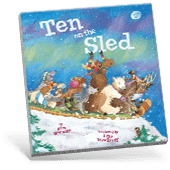 Ten on the Sled
by Kim Norman

There were ten in the bed, and the little one said, “Roll over, roll over!” Sound familiar? If so, you’re in for a treat with this adorable rhyming picture book that features a giant sled, a snowy hillside, and a forest-full of animals (ten to be exact). This is a one rhyming picture book you may find yourself singing instead of reading! 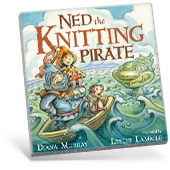 This delightful rhyming picture book offers a hilarious look at a pirate who doesn’t like to heave and ho and swab like the rest of the crew aboard the Rusty Heap. Ned does like to knit, and the captain isn’t very happy about that! But maybe Ned’s knitting will come in handy after all!

Do you have a favorite rhyming picture book? Please share it in the comments and I’ll add it to our Readers’ Picks list!

I recently published the picture book, Orange S’more-ange, for teaching rhyme. I would appreciate consideration of it for your Readers’ Picks.

Would love this for my grandchildren

There are so many rhyming books out there! They are all so catchy and fun! Pout Pout Fish is an absolute family favorite!

My son loves The Gruffalo! Rhyming books have helped him so much with his reading. He now picks out rhymes in our everyday conversations as well. Thanks you for the helpful tips!

Our family enjoys many of these, but I learned about some new titles to add to our list. Thank you!

All great book choices.Kids love these stories and love the rhymes

Pout pout fish is one of our favorites!

I am a foreign, and I am teaching my child ESL.
Those rhyming books are the best! He learned so fast! Sometimes I don’t know how to pronounce a word, but the rhyme teaches e by an example. I would buy anything in the list when there are some I love in between.

This is a good list. We used to read a lot or these to the kid’s I used to have in daycare. They were very entertaining.

We have so many of these books! They are great! My kids will have me read them over and over!

Pout Pout Fish and Barnyard Dance are 2 of our favorites! We always have so much fun with rhyming books. Sometimes we even make up tunes for them and sing them as songs.

I’ve heard of a few of these books and some I’ve never heard of. Will have to add some of these to our next library book run!

We love Rhyming Dust Bunnies and The Big Mean Dust Bunny. We have a few others of these, but the rhyming dust bunnies fit into any “word family house.”

Sandra Boynton is our favorite!! We’ve read them so much my older kids have many of her books memorized. Her stories are creative, fun, and short enough for even the youngest to enjoy.

I have used several of these books. They are great books for rhyming. My son loves to find rhyming words

My kids would love these!

Great list! My kids and I love the pout pout fish book. So much fun!

Thanks for such a great list! A few of our favorites are on it and some new ones to check out!

I hope you find some new favorites, April!

Hi,
I try to download the books, but that is doesn’t work.
Could you please help?

Nehal,
Here is the link to download a list of these titles to take to your library. If it still doesn’t work, please let me know. Also, you may try a different web browser. That usually fixes these issues.

The books listed on this page are wonderful. I have several of them in my own library, and I love reading the stories to my kids and pausing to see if they can fill in the blanks. Thanks for the great list.

You’re so welcome, Jessica! My little ones and I had lots of fun with pausing and them filling in words too. Chicka-Chicka-Boom-Boom was a favorite for that!

Thank you for the list. Some i have. Others are a must have :)

First month with AAS has been less stress, fun ,and well organized.

It’s so great to hear that your first month has gone so well, Kristie! ?

We read a few on this list regularly. I need to find the others before my kids get too big (I mean when THEY will THINK they’re too big!)

I know what you mean, Alison. But your kids will come back to these sort of picture books when they get even older. Hardly a month goes by that I don’t catch one of my kids reading one of the picture books I have (set aside for future grandchildren) and my youngest child is 12. Basically, so many picture books are such wonderful books that all ages can and do enjoy them!

Thank you for this great list! We will be requesting several of these from our library.

Llama Llama Red Pajama has been a staple in our house since my 9yo was itty-bitty :)