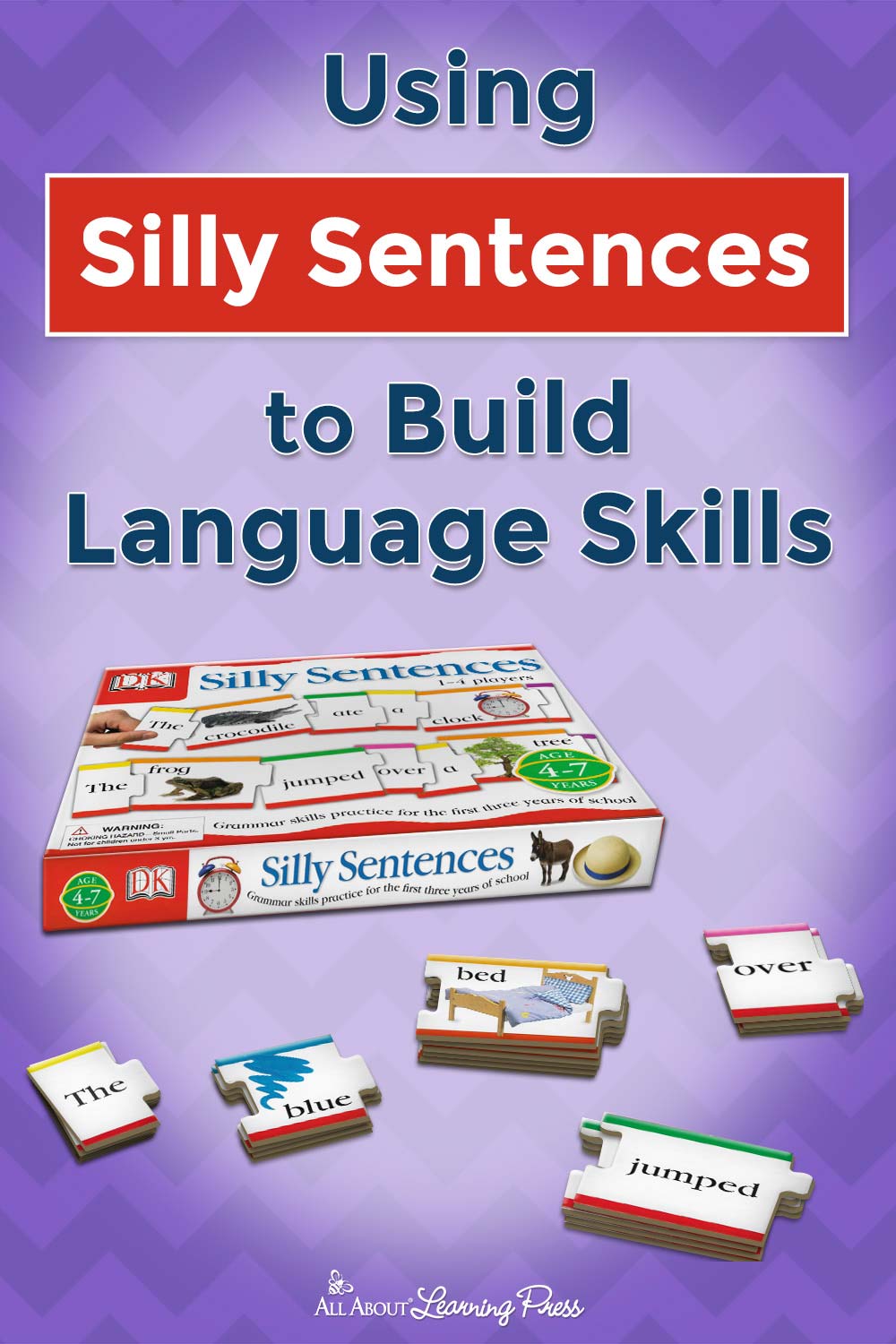 The Cow Jumped Over the … What?!

Grammar can seem like an intimidating subject, but not when you explore it with Silly Sentences! Using the 124 color-coded puzzle pieces included with the hilarious game, kids learn how to construct sentences, discover the functions of different words, and have a blast at the same time! 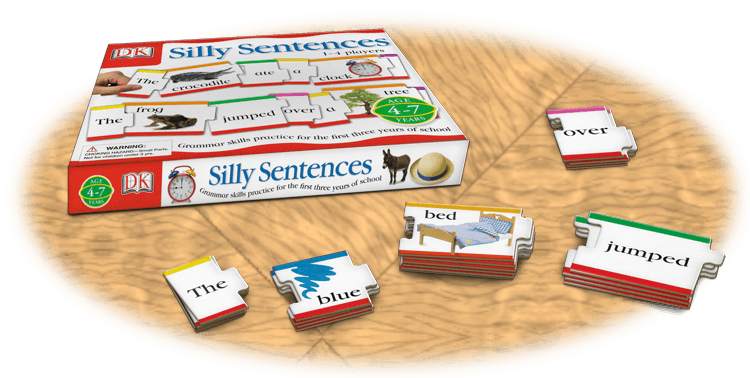 Although Silly Sentences is recommended for children age 4-7, older kids won’t be able to resist the absurdity of the sentences that are created during gameplay. Get ready for lots of laughter and tons of very silly sentences!

The first thing you’ll notice is that every card is color-coded according to grammatical function. Nouns are orange, adjectives are blue, verbs are green, prepositions are pink, articles are yellow, and periods are purple. Sort out all the orange noun cards and place them face-up in the center of the table so everyone can see which nouns are available to use. Deal out the remaining cards to the players.

Now that you have your cards, sort them by color and put each color in a pile.

On each turn, players may do one of the following: 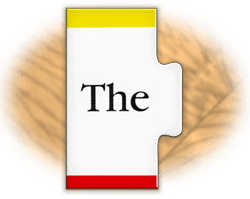 It looks like you can play an adjective from your pile and add a noun from the table to your sentence.

Now Player 2 can either add on to your sentence or start a new one of her own. She decides to add on to yours and plays the verb card jumped. Player 3 adds a pink preposition card, over, and then it’s your turn again.

Can you finish the sentence? Find a lower-case article card, like a, and then pick an adjective card (if you have one) and a noun card to add to your sentence. This is where the sentence might get very, very silly!

You don’t have an adjective, but you can play a noun card, so you play the word house and your turn is over.

In Silly Sentences, every sentence has to end with a period, so the next player plays his purple period card and completes the sentence.

Your sentence is complete, so it’s time to read it out loud: The scary cow jumped over a house. Now that’s a silly sentence!

You can have as many sentences going as you like (AND you can play on the other players’ sentences, too), but if you can’t add a card to any of the sentences in play, you miss your turn. The first player to use all his cards is the winner! 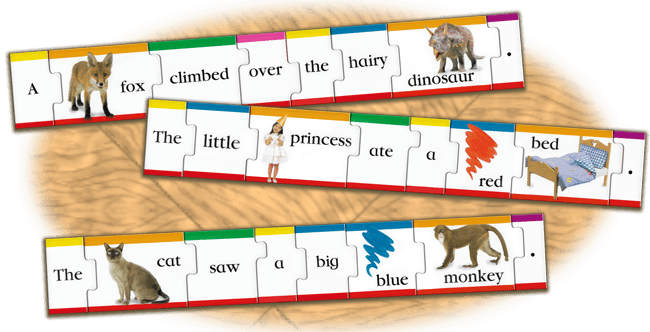 Look at all those silly sentences!

Notes from Our Game Testers

Does your family have a favorite board game that is a fun and “sneaky” way to build language skills? Please share in the comments below!

This looks like a fun way to “sneak” teach!

It is a great way to sneak in some super fun reading practice, Tammy!

We have silly sentences game age 4-7. We feel there should be a further set of words to upgrade the basic set but cannot find any. Is such a set available?
The puzzle pieces could also be available as magnets to use on a fridge. We’ve all had letter magnets why not word magnets too

Connie,
There are word magnets available commercially! LOTS of options, actually. My favorites are the poetry magnet sets that have enough options to allow for rhyme and rhythm in the sentences and phrases built.

I don’t think there is an add-on for this game. At least I haven’t been able to find one. However, we developed our own Silly Sentence Match-Ups printable that includes sets for levels 1 through 4 of All About Reading.

So we just did the lesson with silly sentences in Level 1.. And my daughter is begging for more silly sentences.. I already ordered the game before seeing this post, but can you pretty pretty please make some extra sheets of silly sentences to coincide with the different levels?! I haven’t seen her that excited to read and her fluency was amazing because she was too busy laughing to over think like she usually does when reading!

Erin,
Did you see?!? We loved your suggestion and we now have printables for silly sentences activities to coincide with each level of All About Reading. Check out our newest blog post, Silly Sentence Match-Ups. :D

Erin,
Thank you again for this suggestion. Marie and the blog team loved it as much as I did and it is now on the calendar! Look for silly sentences activities for all AAR levels sometime this summer.

What a great idea, Erin. I’ll pass this suggestion along; it’d be fun!

But let your daughter know that there will be funny activities in the other levels too! One of my daughter’s favorite activity in the whole series is in level 2. It’s called “Party Monsters Make Dinner” and by drawing different ingredients, the menu includes things like coffee & hot dog sandwiches and radish & fish cake! It resulted in soooo many laughs and giggles!

What a great idea for a learning game! This feels like a version of Mad Libs for younger children.

I see what you mean, Rachel. I’ve enjoyed so many Mad Libs over the years!

From my experience, children love it when you use silly sentences. It really motivates them and makes learning fun.

I’ve had the same experiences, Jackie. Being silly is a fun way to motivating learning!

Looks like a great game, subtle learning while having fun and being silly.

Exactly! Games can be a great way to teach concepts and have fun together.

This looks like a fun addition to our game selection.

This game looks so fun!! You guys have the BEST ideas!! I know my boys would love this one.

So fun! Thank you for this recommendation.

I love the multi function of the kit. I can use that at different grade levels/abilities to intervene at their level. I also love the silliness factor taking out the intimidation that so many grammar rules create! This is in my wish list for sure!

I hope you and your kids have fun with it, Patsy!

This game looks helpful! Thanks for sharing!

These are so much fun!

Will def be purchasing this. Thank you!

I hope you and your family enjoys Silly Sentences!

Our family love to play ‘Pass the Bomb’ in which a ticking bomb is passed from player to player who much come up with a word containing the letter group on the turned over card before the bomb goes off and you lose the game (and shriek like a fool!). It’s a great way to brush up on spelling skills – and to learn new ones without anyone even thinking they are giving their brain a workout.

Oooo, thank you for the recommendation, Lesley! It looks like a lot of fun.

My 4yo has been reading for a year and love to play games, and we are now learning the parts of sentences. She would love this game!

Anita,
This would be a great game for a young reader. It would provide practice in a fun and exciting way!

This looks like a great way to reinforce reading in such a fun way!

I like this. It would be great to use.

Yes, great eye, Catherine! The game does allow for a lot of flexibility with the sentences, much like English’s flexibility.

How much do they cost?

Currently on Amazon, it is under $10.

This looks like such fun!!This would be perfect for my daughter!!

This looks like a great game! I will consider it for my younger child in a couple of years.

“Silly Sentences” is a fun, motivational game that makes reading and language fun and interactive. The word cards are also beautiful and have picture clues for new vocabulary. My students thoroughly enjoy making the silly sentences and continue to learn and grow each time they play. I highly recommend Silly Sentences!

Thank you for the recommendation, Barbara. It’s great to hear your students have enjoyed it and learned from it!

This is a fun way to learn about sentences. We have this game at home and my daughter loves it. She likes anything funny.

my kids love these kinds of word/puzzle/games but we don’t have this one yet, they would enjoy it

What a fun way to learn language skills! It looks like something my kids would enjoy.

My daughter has Autism and hearing loss she is a year behind her peers at present especially in reading and phonics. We have been looking for a reading programs to assist her and hopfully bring back to joy of learning. This looks like an amazing program we would like to try!

Bronwyn,
We have two blog posts that you will likely find helpful. Teaching Reading and Spelling to Autistic Children and Auditory Processing Disorder: 10 Ways to Help Your Child The second one doesn’t directly apply to your daughter, but many of the tips and ideas for auditory processing disorder will be helpful for partial hearing loss as well.

Please let me know if you have any questions or need more information.